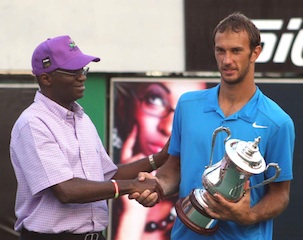 After the disappointment of losing the final in the first leg, Croatian tennis player, Ante Pavic returned to create an unexpected upset to win the second leg of the Men’s Singles event at the just concluded 13th Governor’s Cup Lagos Tennis Championship after defeating India’s Jeevan Neduchezayan in straight set of 6-4,6-3.

The encounter seemed to be heading for a lengthy spell in the first set as both players were resilient, refusing to drop any match point but Pavic broke his opponent to lead the game and finished him off after picking all the points of his service, the set ended 6-4 with applause from the fans that included schools children at the Lagos Lawn Tennis Club, Onikan.

The second set was a mirror of the first set.

A frustrated Jeevan started serving wrongly and further showed his anger when he deliberately played the ball out of the court after losing a match point. He(Jeevan) ended up losing the game 3-6 in the second set.

Expressing his joy after the win, Pavic said that his opponent played well but he was happy coming out victorious.

The number five seeded Croatian, explained that he had to be patient when it seemed as if the game would go against him and his patience paid off.

“I think I played very well against Jeevan because he is also technically sound. I guess my patience paid off at the end.

“It has been two weeks of total enjoyment here in Lagos because I really enjoyed every moment I spent here and the city of Lagos will always be in my history book.

“This win means a lot to me and I will just play two more tournaments this year before I take a break,” an elated Pavic explained.

The Russian number two seed had to retire from the game in the final set after picking up a recurring knee injury before the end of the second set to allow her Italian win the game in the third set.

A disappointed Bratchikova told P.M. NEWS Sport after the game that she never expected to lose the final, but could not help the situation because the injury aggravated.

“I’m not happy to have lost but that is just how the game is. I played well in the first set but the knee injury prevented me from playing well in the second set.

“I would have retired the game much earlier, but I thought that I could still put up a little fight. I have to gave up at 3-0 in the third set,” said Bratchikova who played to the second round of this year’s US Open.

Meanwhile, Martins Abamu has won the inaugural Governor’s Cup Junior Tennis Championship by overpowering Michael Osewa in two straight sets of 4-1,6-4 while twin sisters, Destiny and Essence Martins slugged it out in the female category but it was Destiny who won 1-4,4-2,10-5.