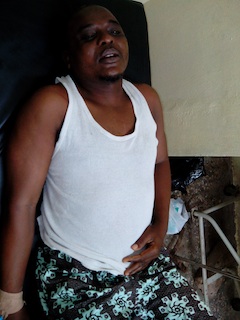 If not for the quick intervention of the Commandant of the Nigerian Navy Secondary School,Onikoko, Adigbe area of Abeokuta, the Ogun State capital today, a teacher in the school would have died.

It all happened this morning when six naval rating officers pounced on one of the civilian teachers in the school and beat him to stupor over a minor argument between them.

The victim, Rasheed Ibrahim, on his sick bed, after he was revived by the medical team of the Federal Medical Centre, Idi Aba, Abeokuta at the emergency ward, thanked God for the intervention of the Commandant, without which he would have been killed by the naval
officers.

Ibrahim, a Senior Food and Nutrition teacher in the school since 1998 was ordered rushed by the commandant first to the the School sickbay for first aid treatment from where he was transferred to the FMC, Abeokuta.

An eyewitness,who is also the Sports Master of the School, Mr.Mathew Olukunle Oduronmbi, told P.M. News that trouble started following an argument between the victim and one of the rating officers identified as Aliyu. This later snowballed into some commotion in the school premises.

According to Oduronmbi,”I saw them arguing, the argument dragged for a short time, I felt that it was a minor argument, so I did not intervene . It happened around 7:15 am, at that time , I saw Aliyu trying to drag Mr Ibrahim out of his car and he succeeded.Another officer, Oyerinde later instructed Aliyu to beat him up. That was how the whole issue started.In the process, another Senior Officer, Shodiya came out from his vehicle and joined them,while other rating
officers pounced on him to the extent that they used their thick belts on him until it got tore into pieces .All my attempt and that of others to pacify them was rebuffed .

“This was not the first time it will happen, this is the sixth time in two years that civilians working in the School here have been brutalised and nothing has been done”, he explained.

Ibrahim, the victim said he was beaten for no just cause. He claimed that the officers accused him of abusing one of them, which was a wrong accusation.

According to him,”almost all the parts of my body are paining me now. I have pains on my head and my back.My ribs are also affected and you can see bruises in all parts of my body, I dont know the condition of my back now because the Doctors said they are still going to do general
examination on my body, but the back is seriously paining me”.

Narrating how it all happened, the victim said, “when I got to the gate of the school this morning—normally when we get there, a rating officer will check our car . So, I was expecting them to come out, they didn’t come out.There were two buses at the gate blocking the
entrance. I called one of the officers, Aliyu to ask for what was
going on and he just flared up with me and I was surprised what might
have caused that.

“Suddenly, another rating officer, Oyerinde who was in the security
post threw a stone on my car, and when I demanded for such action from
me, both of them engaged me. They were later joined by one of the
Senior Officer,Mr Shodiya,who ordered that the men should beat me and
they were joined by other Officers and they all pounced on me .

“They used their iron belts to beat me, dragged me on the floor, used
sticks and every other things available to beat me .People that were
there tried to stop them, they refused to stop until the Commandant
came out, by then, I had gone into coma.

When PM News contacted the Commandant of the School, Commodore M A
Olatunji on phone to comment on the matter, he neither confirmed nor
denied the incident, but declined to comment on it, saying he need to
get clearance from the authority before he could make any comment.

“Before I can talk on any incident, I have to get a clearance from the
higher authority and I also need to see the person I am talking to”,
the Commandant stated.