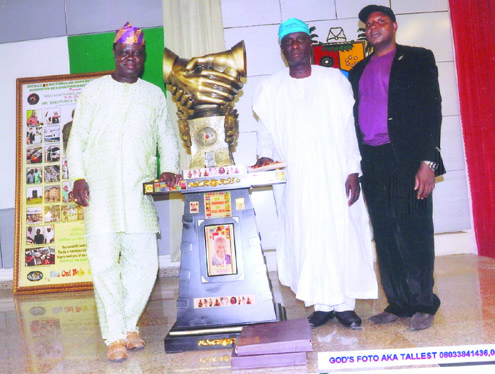 Governor Babatunde Raji Fashola of Lagos State has received an Intercontinental Good Governance and Peace award from the Local Organising Committee, LOC, of the BRF Wrestlemania.

The award, a golden statute, was received on behalf of the Governor by Chief of Staff, Olanrewaju Babalola at the Governor’s Office at Alausa, Ikeja.

Chairman of the LOC of the annual BRF Wrestlemania, Primate Charles Odugbesi said at a brief ceremony for the award that Governor Fashola has impacted positively into the life of many people and most especially sports men and women, adding that the support the BRF Wrestlemania has been received from him since the maiden edition in 2011 has gone a long way to sustain the competition that saw wrestlers across the world coming to Lagos to showcase their talents and win trophies.

Primate Odugbesi who was at the ceremony with the Coordinator of the BRF Wrestlemania, Prince Olarenwaju Mohammed and some wrestlers said that “Fashola has made us proud with his good works since he assumed office and we are proud to be called Lagosians today. This award is to recognise him for what he is doing and to show the appreciation of the LOC of BRF Wrestlemania

The Chief of Staff thanked the wrestlers for giving the Governor the award which he was surprised to see, saying “whatever you do try to do it well because the reward is coming one day. What I know that the reward in sports doesn’t come in a day, it takes commitments and perseverance to get noticed and rewarded in sports. The Governor would have loved to receive this award personally but due to urgent state’s functions I’m here to receive this honour on his behalf. Once again, I want to say thank you.”