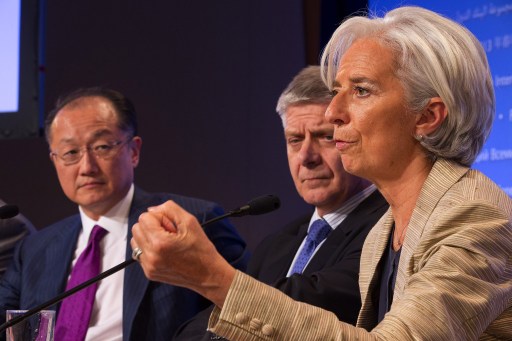 The International Monetary Fund on Thursday warned Nigeria and other sub-Saharan African nations witnessing rapidly growing economies that they need to do more to protect themselves against financial shocks.

In a sign of the continent’s growing role in global financial markets, the IMF urged governments to mitigate the impact of cash rapidly flowing in and out of their economies.

Many African countries have benefited enormously in recent years from investors moving cash out of moribund developed markets in search of higher yields.

In 2012 alone portfolio and cross-border bank flows to the fastest growing markets in the region passed $17 billion, with Ghana, Nigeria, and Zambia the main beneficiaries.

Country after country has sought to tap bond markets for relatively cheap loans.

But a possible economic slowdown in China and an end to US Federal Reserve stimulus is starting to make investors more cautious.

In some countries, like South Africa, that has caused a large depreciation in the local currency, pushing up import prices and fuelling inflation.

More broadly the IMF said the impact of these trends had so far been “muted” but it warned “if the global turmoil persists, risks of contagion and possible reversals may increase.”

The IMF predicted weaker than expected growth of five percent in 2013 thanks to a “more adverse external environment.”

It recommended better monitoring of capital flows and develop tools to limit the impact of surges or reversals in investment.

The IMF also warned that a slowdown in major markets like China could hit commodity prices, with a devastating impact on revenue for many African governments.