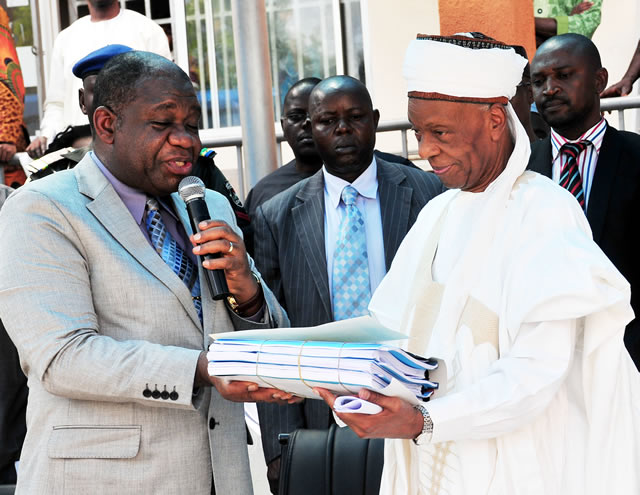 Across Nigeria today, the Federal Government completed the final burial rites for the Power Holding Company of Nigeria, handing over to private investors some of the companies unbundled from the company, derided by Nigerians for its inefficiency in not being able to supply electricity to them.

The investors who have become beneficiaries of the nation’s privatisation drive include Seoul-based Korea Electric Power Corporation as well as local investors.

“The PHCN (Power Holding Company of Nigeria) has essentially ceased to exist,” Power Minister Chinedu Nebo said at a brief ceremony while handing over the Abuja (power) Distribution Company to its new owner, Kann Consortium Utility Company Limited. The company was represented by its chairman, Alhaji Shehu Salami, a prince of the Sokoto caliphate.

“We now have distribution, generation and transmission companies. So, it is no longer PHCN,” Nebo said.

West Power and Gas Limited took over the biggest of the distribution companies, Eko Distribution Company at a ceremony im Marina, Lagos.

The handing over was done by Minister of Industry and Commerce, Olusegun Aganga. He represented the Vice President Namadi Sambo, who chairs the National Privatisation Council.

In Benin, the new owners of Benin Electricity Distribution Company, BEDC, also took possession with an appeal to the government to conclude payment to workers of the old PHCN to enable them enjoy stable working environment. Chairman of Vigeo Power Limited, Otunba Victor Gbolade Osibodu, made the appeal. His company now controls 60 percent of the new company.

The handing over ceremony took place at the Premier Hotel, Ibadan in the presence of Governor of Ogun State, Senator Ibikunle Amosun and his Oyo State counterpart, Senator Abiola Ajimobi


Interstate Electrics Ltd., on Friday took over the distribution of electricity in the South-East geo-political zone with a pledge to improve energy delivery and customer service. The Chief Executive Officer of the company, Mr Robert Dickerman, made the pledge in Enugu at the handover of Enugu Electricity Distribution Company (EEDC) to the company.

He said the takeover marked the beginning of stable power supply to energy consumers in the South-East region.

In Port Harcourt, the 4Power Consortium Ltd. are the new owners of the Port Harcourt Distribution Company (PHED).

The presentation of the certificate of ownership was done by Dr Godknows Igali, the Permanent Secretary of the Federal Ministry of Power,on behalf of the Nigerian VP, Namadi Sambo.

He said that the exercise was a culmination of 14 years of painstaking efforts to liberalise the nation’s electricity sector to attain desired economic growth.

The ownership change of the distribution companies of the defunct PHCN has raised hopes that Nigeria could be in for better times, in terms of electricity supply.

Government also believes that with the involvement of the private sector, a floodgate of investment funds may have been thrown open, with expectations that in the next ten years, up to $40billion could be pumped into the sector.

President Goodluck Jonathan expressed the optimism in Lagos today, in a speech to flag off the 10th Lagos International Trade Fair.

Jonathan was represented by the Minister of Industry, Trade and Investment, Mr Olusegun Aganga.

“We have created an environment for investment; it is in this capacity that over 40 billion dollars worth of foreign investment will be coming into the country within the next 10 years.

“Also, we have Electrovatts from Brazil co-investing,” he said.

He noted that the Federal Government had signed a Memorandum of Understanding with the General Electric on investment of about one billion dollars for an assembly of turbines in Nigeria.

“I am delighted to say that the first 250 million dollars investment is currently running in the country, and we have done ground-breaking in Calabar already.”

“What you expect to see under this leadership is increased investments, power generation and distributions, growth of industries and Small and Medium Enterprises (SMEs); we believe that the future of our country is bright.”

The privatisation of PHCN has long been in the works in Nigeria, where blackouts occur multiple times daily despite the country’s status as the continent’s largest oil producer.

From PHCN, Nigeria has created 18 successor firms comprising 11 for electricity distribution, 6 for power generation and one for transmission.

Nigeria has portrayed the privatisation of electricity generation and distribution as a reform capable of finally bringing steady power supplies to the country, where businesses are forced to rely on diesel or petrol generators to cope.

President Goodluck Jonathan in September handed over operating licences to investors for most of the companies created from the splitting up of the PHCN after payment of a total sum of about $2.5 billion. (1.85 billion euros)

Nigeria will retain ownership of the national grid, but privatise its management. Canada’s Manitoba Hydro International was named as its manager for three years in 2012.

The privatisation of telecommunications in Nigeria is generally credited with bringing improved service and accessibility to the country.

However, critics have expressed concerns that many of the bidders for power assets have been politically connected barons in Nigeria and questioned whether the assets will be properly managed.

Government has however given assurance to monitor the operations of the new owners via the Nigerian Electricity Regulatory Commission (NERC) and Bureau of Public Enterprises (BPE).

Government hopes the core investors will stick to the rules of engagement.