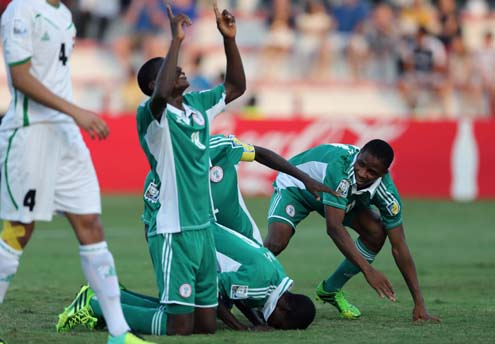 Nigeria’s Under 17 team beat their South American rivals, Uruguay by 2-0, thanks to a brace by Taiwo Awoniyi.

The first goal was scored in the 17th minute, while the second came in the 79th minute.

Nigeria will now face Sweden in the semi-finals of the FIFA U-17 World Cup in UAE. Both teams had met at the group stage, ending up with a thrilling 3-3 scoreline.

The other semi-final will be between Mexico and Argentina.


Taiwo Awoniyi – deputising for the injured Success Isaac –was the star of the match in a game that was a true test of the Golden Eaglets’ title aspirations.

Uruguay had the first chance of note after only six minutes when Enrique Etcheverry crossed low through the penalty area. The impressive Leandro Otormin got a boot to the ball, but could only direct his effort wide of goal.

It was a false dawn for the 2011 runners-up, however, as the Coach Manu Garba’s boys took the game by the scruff of the neck after 18 minutes.

According to Fifa.com, the Nigerians, who scored 18 goals in their four games heading into the quarter-final round, opened the scoring from a fabulous piece of creative interplay.

Kelechi Iheanacho, scorer of five goals at these finals, laid a wonderful through ball, perfectly weighted, from deep in midfield that was latched onto by Taiwo Awoniyi. The striker made no mistake, hitting home to the back post for his second goal of the tournament.

Stunned into action, the South Americans had a decent spell shortly after. Kevin Mendez and Otormin both tested Eaglets’ goalkeeper Dele Alampasu from distance with powerful efforts. But it was Nigeria who controlled most of the possession and created the more dangerous chances.

Captain Musa Muhammed’s cross from the right after 34 minutes was only just missed on the doorstep by the tall and rangy Awoniyi.

The second half started with a flurry of chances for Nigeria, Awoniyi and Musa Yahaya both going close to scoring after creating space for themselves at the edge of the penalty area. Uruguay were hanging on, absorbing wave after wave of Nigerian attacks.

In the 68th minute, Iheanacho turned and fired from the edge of the box only for his shot to come flying off the back of a brave Uruguayan defender.

The knockout blow finally came in the 79th minute, and it followed the same pattern as the first Nigerian goal. Iheanacho picked up a perfect pass at the edge of the area from Chidiebere Nwakali and carried the ball toward goal with an elegant touch. The Uruguayan defence collapsed on the No. 10, but he had the presence of mind to pull the ball across the face of goal, where Awoniyi stabbed home inside the far post to send the fans into hysterics.

The Nigerian team now move on to their seventh U-17 World Cup semi-final, where they will face another thorough examination in the form of the organised and talented Swedes in Dubai.