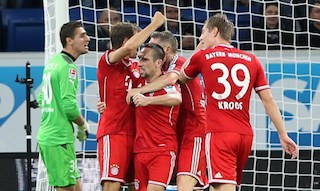 Bayern Munich equalled the record for the longest unbeaten run in the history of the Bundesliga with a 2-1 win at Hoffenheim on Saturday.

The hard fought result was enough to extend their remarkable record of not having lost a top-flight game in more than a year.

In doing so, they have equalled the all-time Bundesliga record of 36 matches unbeaten set by Hamburg between January 1982 and January 1983.

Bayern manager Pep Guardiola said: “It was a difficiult win to get, but that’s always been the case for Bayern on this pitch.

“It wasn’t without a doubt our best performance but we’ve won so I’m satisfied.”

Bayern can go on and own the record outright by avoiding defeat against neighbours Augsburg next weekend.

Guardiola’s side trailed at the Rhein-Neckar Arena in Sinsheim when teenage defender Niklas Suele converted in the 34th minute after Manuel Neuer made a hash of dealing with a corner.

However, the visitors were level inside five minutes when Franck Ribery’s free-kick took a huge deflection off Mario Mandzukic to trump Koen Casteels in the home goal.

Then Thomas Mueller secured the win with quarter of an hour remaining when he tucked the ball in after a flurry of shots and rebounds in the Hoffenheim area.

Despite having Dante and Javi Martinez back in their starting line-up, Bayern were not at their very best but the win means that they end the weekend a point in front of Borussia Dortmund at the league summit.

Dortmund tore apart Stuttgart with a 6-1 win at the Signal-Iduna Park on Friday, last season’s Champions League runners-up coming from behind with Robert Lewandowski scoring a hat-trick to take his personal tally for the season to nine league goals.

Meanwhile, Bayer Leverkusen were beaten 1-0 at struggling Eintracht Braunschweig, a result that leaves them third, aon 25 points, three behind Dortmund.

Moenchengladbach are fourth with 19 points, after a 2-0 win at Hamburg, the goals in either half coming from striker Max Kruse.

Down at the foot of the table SC Freiburg were toasting their first success of the season, a 3-0 win at fellow relegation strugglers Nuremberg.