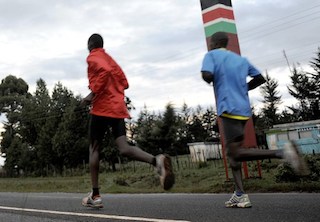 NAIROBI (AFP) – A failure by Kenya’s sports bosses to address allegations of doping is casting a shadow over the country’s inspirational rise to global distance running dominance and tarnishing a major source of national pride.

Last year the global anti-doping body, WADA, asked Kenya to investigate after an undercover German television journalist alleged that the blood-boosting drug EPO and other doping products were readily available to local athletes.

“Despite assurances, WADA is still waiting patiently for the investigation to take place,” the anti-doping body said this week.

Accused of dragging its heels and adopting a head-in-the-sand approach to the problem, Kenya now risks being singled out for criticism when WADA holds it World Conference on Doping in Sport in Johannesburg on November 12-15.

At the very least it would be damaging for running powerhouse Kenya’s reputation, and at worst could pave the way for punitive action by the International Olympic Committee (IOC).

Since January 2012, increased doping tests have netted 17 Kenyan cheats. While none of them have been big-name record breakers, the findings have contradicted previous assertions from Athletics Kenya, one of the country’s most powerful sports bodies, that its runners are spotless.

Speaking on the sidelines of last weekend’s Nairobi marathon, a major showcase for the undoubted depth of Kenyan talent, Athletics Kenya’s vice president David Okeyo insisted that there were only “isolated cases”.


“We are very serious on the doping issue… we’re not trying to hide anything,” he stressed, saying the sport was far too important for the country to be allowed to be ruined by cheats.

But all is not well in Athletics Kenya, which been locked in an internal power-struggle for much of this year amid a rebellion against its president Isaiah Kiplagat, who has been in charge for 21 years.

Athletics Kenya has found itself being unfavourably compared to cycling’s governing body, the UCI, which was accused of turning a blind eye to doping by Lance Armstrong and others in the peloton because it was also charged with promoting and financing the sport — a clear conflict of interest.

Kiplagat’s assertion that the sports ministry is to blame for the stand-off with WADA also signals the country has a major bureaucratic problem.

“Nothing has been done about the issue of doping in the country,” Kiptanui told AFP, accusing Athletics Kenya bosses as being more concerned with “fighting each other over the management of the sport.”

Although he said he believed that most Kenyan runners were clean, he alleged that local anti-doping officials were so determined to keep a lid on even isolated cases that they “collude to clear the athletes of any wrongdoing before they are caught.”

According to Athletics Kenya, the runners testing positive have either been naive — by taking over-the-counter cough remedies without checking — or manipulated by corrupt foreign sports agents operating in the high-altitude Rift valley region.

The tensions with WADA are also bad news for the likes of Olympic 800m champion and world record holder David Rudisha, the new marathon world record holder Wilson Kipsang or other top elites, who are intensively tested and are widely seen as nothing less than exceptional athletes.

Such runners risk now being tarnished if the clouds over Kenyan sport do not clear.

“The problem is that we don’t know,” said Ross Tucker, a prominent exercise physiologist with the University of Cape Town and Sports Science Institute of South Africa.

“I think Kenya is one of sports’ greatest stories. I want to believe, but I’ve been burned before by athletes who I admired, but who turned out to be taking performance enhancing drugs,” said Tucker, whose website sportsscientists.com is regarded as a leading authority on physiology, performance and doping in athletics and cycling.

According to Tucker, there was no evidence that Kenya had a doping problem similar to that seen in cycling.

“It’s not like in cycling, where you have organised teams with doctors and agents and the money to have a sophisticated doping programme. Some of these (Kenyan) athletes have problems getting decent food, and have training setbacks from basic preventable diseases, like malaria, so it’s hard to believe that there is an expensive doping programme going on,” he said.

Nevertheless, the allegations and perceived failure of Kenya to address the issue had opened up a credibility gap that needs to be closed.

“The authorities in Kenya have every interest in investigating and opening up, showing that they’re transparent and removing the doubts,” he said.