Who killed JFK? The question that lingers 50 years after 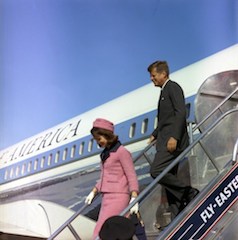 For Jesse Ventura, the professional wrestler turned independent politician, John F. Kennedy was the greatest president in modern US history — and the proof lies in his 1963 assassination.

“They wouldn’t even let him do one term. That’s what showed his greatness,” said Ventura, the former governor of Minnesota and author of the new book, “They Killed Our President.”

Ventura believes that Kennedy was assassinated in Dallas probably because he sought to make peace with the Soviet Union and challenge the military-industrial complex following the CIA’s botched Bay of Pigs invasion of Cuba.

“I believe he had more enemies within his own government than with the Russians and all of them combined,” Ventura told AFP. “Imagine how the world would have been different if Jack Kennedy had lived, with no Vietnam (War) and the Cold War ended in ’65. What a great world I bet we would have had today.”

But alternative theories on Kennedy’s death remain rife ahead of the 50th anniversary of his assassination on November 22. A Gallup poll in 2003 found that a mere 19 percent of Americans believed that a sole individual was behind the murder, with more than one-third agreeing with theories that the mafia or the CIA killed him because he threatened their interests.


Much of the suspicion revolves around how Oswald, a former defector to the Soviet Union with a troubled life, could have single-handedly killed one of the world’s most powerful people by firing from the top of the Texas School Book Depository. Oswald’s chance to speak publicly ended two days later, when he himself was fatally shot by nightclub owner Jack Ruby.

In works on Kennedy’s assassination — a search under “JFK conspiracy” on online bookstore Amazon found nearly 800 books — authors have questioned whether another gunman opened fire from the now infamous “grassy knoll” in front of the motorcade. A 1979 report by a congressional committee said that acoustic evidence pointed to a second gunman, although subsequent studies have challenged the assertion.

A home movie filmed by eye witness Abraham Zapruder has offered ample fodder for alternative views, with some theorists alleging that “the Umbrella Man” — who opened an umbrella despite the sunshine — was sending a signal.

One of the most prominent alternative theories of the assassination came in Oliver Stone’s 1991 film “JFK” which suggests a cover-up and involvement by Kennedy’s successor Lyndon Johnson. Stone said he wanted to create a “counter-myth” through the movie, which contributed to a decision by Congress to release more records on the shooting.

Some of the first major challenges to the official narrative came not from the United States but from Europe where philosophers Bertrand Russell and Jean-Paul Sartre backed a committee in 1964 to challenge the Warren Commission, arguing that it was made up of Washington insiders who would have an interest in concealing any evidence of official involvement.

On the other side of the political spectrum, one early critic in the United States was Revilo P. Oliver, an academic close to far-right causes, who argued that Kennedy was a Soviet puppet who was killed because he had become a liability for Moscow.

In an influential essay written shortly after Kennedy’s assassination, historian Richard Hofstadter described conspiracy theories as part of “the paranoid style of American politics,” although he said that similar dynamics existed in Europe.

The paranoid person sees not just fleeting events but feels powerless against a “gigantic conspiracy” that is perceived as driving history and threatening an entire way of life, he wrote.

While the Kennedy assassination remains among the most contested events in US history, a slew of authors have also challenged the official narrative over traumatic events including the September 11, 2001 attacks and the 1865 assassination of President Abraham Lincoln.

President Gerald Ford, who served on the Warren Commission as a congressman, insisted there was no evidence of a conspiracy. The Kennedy family has largely accepted the official report, although Robert F. Kennedy Jr. told a forum in January that he was not convinced of a lone gunman.

Kennedy said that his father, the late president’s brother — who at the time of the shooting was attorney general and who was assassinated during his own 1968 presidential run — believed that the Warren Commission was “a shoddy piece of craftsmanship.”

Lance deHaven-Smith, a professor at Florida State University and author of “Conspiracy Theory in America,” said that the term was first popularized to dismiss suggestions of government wrongdoing even though some conspiracies such as Watergate and Iran-Contra were eventually proven.

“People who use the term ‘conspiracy theorist’ and take it for granted are really buying into a propaganda campaign that the CIA launched in 1967,” he said.

Ventura said of his critics: “They say he’s crazy, he’s a conspiracy theorist, they marginalize you.”

“It’s tougher with me because I’m an elected governor,” he said.

“I wanted it on the record, for whatever it’s worth: 100 years from now people will know the 38th governor of Minnesota did not believe the Warren Commission.”