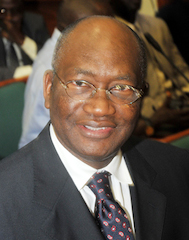 The remains of late Nigerian Vice Admiral Mike Akhigbe, arrived in Lagos on Sunday from the U.S. in a British Airways aircraft.

Akhigbe, a former Chief of General Staff, died in a U.S hospital at the age of 68.

The remains were received at the international terminal of the Murtala Muhammed Airport, Lagos by serving Naval officers, families, friends and Etsako Community residents in Lagos.

A military ambulance branded HQ NAMC, MMIACASEVAC AMBULANCE with registration number NA388E01 brought out the body from the terminal before it was transferred to a hearse Mercedes Benz belonging to MIC undertakers.

The Etsako community members entertained those waiting for the arrival of the remains of Akhigbe with traditional dances.

The convoy which comprises family members, senior and junior military officers left the airport around 19:15p.m.