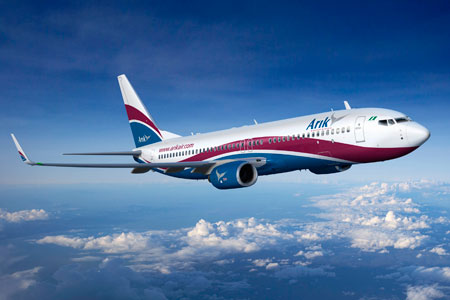 Arik Airline: one of Nigeria's airlines

The crisis buffeting Nigeria’s troubled aviation industry escalated on Sunday with Nigerian airlines announcing that they will no longer pay any money to aviation agencies until the sector is rid of corruption and corrupt people.

Stella Oduah, Nigeria’s embattled aviation minister, testified before the House of Representatives Committee on Aviation on 31 October following revelations that the Nigerian Civil Aviation Authority, NCAA, bought two BMW bullet-proof cars for her at the hefty sum of N255 million.

Oduah denied allegations against her and put all blame on others, but documents show she approved the purchase of the expensive cars that were not budgeted for and that were beyond her approval limit of N100 million.

The Airline Operators of Nigeria, AON, announced on Sunday that Nigerian carriers have stopped remitting all fees to aviation agencies because of the gargantuan corruption rocking the sector.

The remittances of aviation charges stopped on 1 November, said Mohammed Tukur, who spoke on behalf of the airlines.

Tukur said the airlines stopped remitting any money to the NCAA, the Nigerian Airspace Management Agency, NAMA, the Federal Airports Authority of Nigeria, FAAN, and other relevant aviation bodies to protest against the rot in the sector.

He warned that Nigerian airlines may also ground their operations if nothing is done to ‘clean up’ the sector.

“Due to the ongoing crises, we have resolved to stop the remittances of all charges, both current and outstanding debts to the agencies, pending the time they reform or come clean on the taxes and charges they have collected which runs into several billions of naira,” Tukur said on behalf of Nigerian airlines.

The airlines argued that while aviation charges have continued to skyrocket, the money paid has continued to be misused by the aviation ministry and agencies to buy expensive cars.

Consequently, AON called on the federal government to intervene in the astronomical charges imposed on Nigerian airlines.

“The suspension of payment of taxes, charges took effect from November 1, 2013. We call on the Federal Government and all concerned to set up investigative panel to resolve these anomalies,” Tukur said.

The airlines have been struggling with numerous charges, including landing and parking charges, remittance of five per cent taxes on every ticket sold, fuel tax, multiple navigational charges, airport tax as well as very expensive office spaces among other numerous taxes.

Analysts say the numerous charges imposed on airlines are eventually passed on to Nigerian travellers who pay expensive air fairs for poor services.

The carriers expressed disappointment with obsolete infrastructure dotting the nation’s airports and epileptic navigational tools that many say have contributed to air crashes and serious air incidents in the country.

Tukur said AON was studying the involvement of two of its members with the reported BMW car scam and may be sanctioned them if found culpable.

The House of Representative Committee on Aviation probing the alleged scam had fingered an airline operator (name withheld) for its involvement in the procurement of the two limousine cars allegedly acquired for Oduah.

Beyond Nigeria, it was learnt that an international organisation has written the government to express concerns over safety issues in the Nigerian aviation sector as well as the loss of independence of the country’s aviation regulatory body-the NCAA.

This has further heightened the fear that Nigeria may lose its coveted Category One aviation safety status granted the country four years ago by the United States Federal Aviation Administration, FAA.