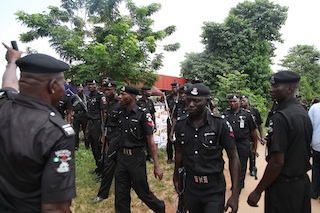 A detachment of policemen from the Asokoro, Federal Capital Territory of the Nigeria Police on Sunday evening barged into a meeting of a faction of Peoples Democratic Party, PDP holding at Kano State Governor’s Lodge in the Nigerian capital city.

The Policemen, led by the Divisional Police Officer, DPO, CSP Nnanna Ama, ordered the meeting which was being attended by five governors to be stopped, threatening to mobilize troops to abort it if his order was not obeyed.

The police officer, who claimed he has order to stop the meeting forced himself into the venue of the meeting though he was initially resisted by the security detail of the governors.


A meeting of the group slated for Sokoto State Governor Lodge in the same area was hurriedly called off last week following indications that policemen were on the way to the venue.

The new PDP members being led by seven governors said the meeting was convened to deliberate on the political future of members, how to receive five new governors said to be interested in joining the group as well as the proposed peace meeting with President Goodluck Jonathan.

Members of the breakaway faction of the PDP later confirmed the invasion of their meeting in a statement issued on Sunday night titled “Impunity Unprecedented Against New PDP As Police Once Again Attempt To Disrupt The G7 Caucus Meeting As It Meets To Accept Committee Reports And Plot Party’s Fwuture.”

“The Caucus of the New Peoples Democratic Party (New PDP) met this evening, Sunday on 3rd November, 2013, at the Kano State Governor’s Lodge in Asokoro, Abuja, to review progress reports, accept the reports of committees and take important decisions on the future of the movement,” the breakaway faction of Nigeria ruling party said in a statement issued by Prince Chukwuemeka Eze, its spokesperson.

“Sadly, midway into the meeting, the Divisional Police Officer (DPO) incharge of Asokoro Police Unit, CSP Nnanna Ama, burst into the scene and ordered the meeting stopped, threatening to mobilize troops to abort it if his order was not obeyed. According to CSP Ama he has the directive from the Villa to arrest the Governors if the meeting is not stopped.

“For a DPO to be sent not only to disrupt meeting of Governors duly elected by Nigerians but to arrest them if they fail to heed his counsel is a sign that these people can decide to disrupt the association of any group of Nigerians at any time knowing that such an act is a breach of the Constitution of our country.

“Not minding all our past complaints about the impunity and disregard of the constitution of the Federal Republic of Nigeria by our Security organs and it is saddening that the Federal Government has continued to maintain stoic silence and bluntly refused to call our security agencies to order, which accordingly to us is one of the wonders of the present administration in Nigeria.

“What is baffling to us the more is the continuous silence of our elders and past Heads of State on these various acts of impunity perpetuated by this administration knowing the grave danger such acts will lead this country to.

“Let it not be assumed that we are the only ones to suffer for this desperation and frustration by some of these misguided elements in this administration as they will go after other Nigerians if they are not called to order on time.

Though before the arrival of CSP Ama, the Governors had gone very far in their deliberations as the meeting had considered the Mobilisation/Contact Committee’s recommendations on how to receive the five new Governors joining the group and directed the NWC of the party to set in motion a machinery to receive the new entrants.

“The NWC was also directed to critically examine the available options and recommend to the Caucus the platform to be used for the 2015 general elections.

“The Caucus is to deliberate on this during its next meeting to be held immediately after the proposed peace talks with President Goodluck Jonathan.

“The options to be considered include either to remain in PDP or adopt any of the three other options, namely, accept the proposal of APC or join PDM, VOA or form a new political party.

“The Caucus also noted the majority request that seeing that we have majority of our members in the National Assembly and majority of the Governors, the idea of continuous waiting for the meeting with Mr. President before deciding our future is no longer ideal in view of the lukewarm attitude of Mr. President and his lieutenants in restoring peace to the party and refusal to attend to most of our demands.

“The Caucus decided that we should give the President some weeks grace before finally deciding on our next line of action.

“The Caucus also stated total displeasure at the lack of reasonable effort to sort out the lingering ASUU/FG face-off which has kept our children at home for over four months.

“It counselled the Federal Government to urgently arrest this ugly incident by declaring a state of emergency in the education sector to enable the Government meet up with the demands of ASUU.

“The Caucus concluded by encouraging members to continue to keep faith with the leadership of the party at this trial period, fully aware that it is only a matter of time before we take a final decision that will auger well for our nascent democracy and the nation at large,” the party concluded.