Pregnant Mother, 7 Others Paraded For Robbery 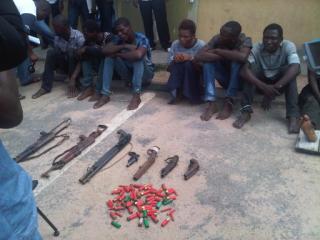 Jamiu Yisa
The Nigerian police command in Lagos State has paraded a three-month old pregnant woman alongside a seven-man armed robbery gang who confessed to the alleged killing of two police officers attached to the Iju-Ishaga Police Station last October.

Among the suspects paraded on Monday was Olubaba, an accomplice of the dare-devil armed robbery kingpin, Godogodo .

The suspects were arrested on Sunday after an exchange of fire with the SARS operatives .

Taiwo Obafunso, 28, the pregnant woman and mother of a teenager told journalists that she unknowingly got involved with the robbers because one of them had at various times given her monetary gifts.