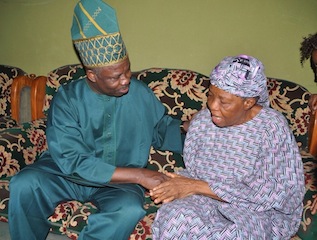 Governor Ibikunle Amosun of Ogun State, western Nigeria has expressed shock over the death of the first civilian Deputy
Governor in the State, Chief Olusesan Soluade.

The former deputy governor between 1979 -1983 during the reign of late Chief Olabisi Onabanjo passed away at the age of 80 years.

In a release Tuesday by the Senior Special Assistant to the governor on Media and Communication, Mrs Funmi Wakama, copy of which was made available to our correspondent in Abeokuta today, the governor said he was saddened by the news of the exit of this illustrious son and former deputy governor, especially at a time when his wealth of experience was mostly needed in the advancement of Ogun State.


Amosun described the former deputy governor as a seasoned administrator, teacher and politician, who
devoted his life to the service of the State and humanity in general.

“Ogun State has lost an illustrious son. As the first civilian deputy governor of the State, under the late Chief Olabisi Onabanjo,he served our people diligently. Even at the ripe old age of eighty, he was still politically active. He has certainly left his footprints on the sands of time”, Amosun said.

The governor commiserated with the family of the late elder statesman, his political associates and the good people of Ogun State on the exit of the astute politician.