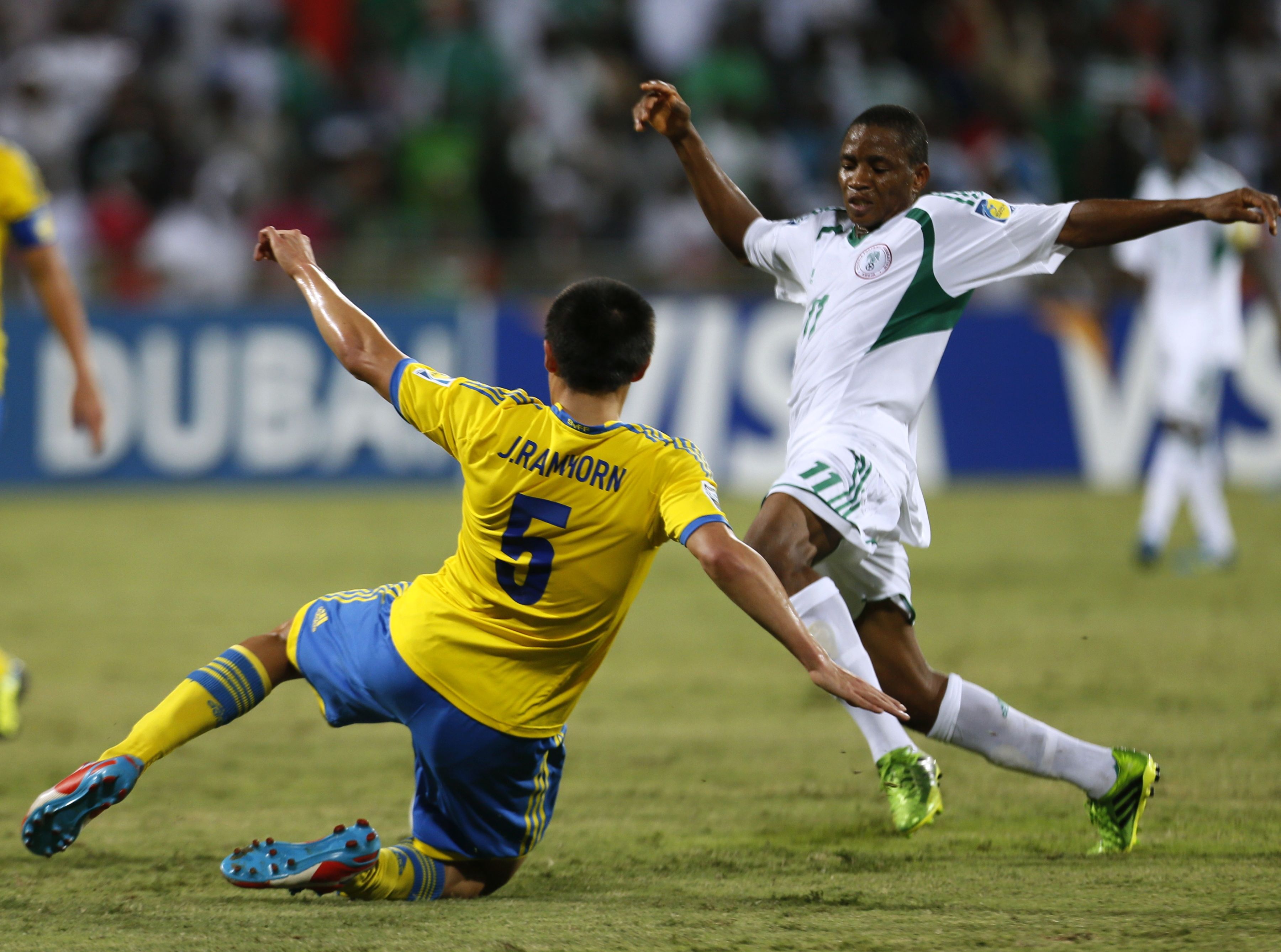 •Musa Yahaya of Nigeria (right) fights for the ball with Johan Ramhorn of Sweden during their FIFA U-17 World Cup UAE 2013 semi-final match in Dubai on 5 November, 2013. Nigeria won 3-0 to meet Mexico in Friday’s final. AFP PHOTO.

Golden Eaglets of Nigeria Tuesday evening booked a place in the final of the ongoing FIFA U- 17 World Cup taking place in the United Arab Emirates, UAE..

The three times champions who are on the verge of winning the trophy for the fourth time defeated Sweden 3-0 in the semi final match which was played at Rashid Stadium in Dubai.

After missing several scoring chances early in the game, Taiwo Awoniyi opened scoring in the 21st minute after he received a through pass from teammate Kelechi Iheanacho.  After the goal Nigeria stamped their authority on the game

However, Sweden,  who played 3-3 draw with Nigeria in the group stage, failed to live up to expectations as the first half tie ended 1-0 in favour of the Nigerian team.

The second half was a different ball game as the Swedes came out to get an equaliser but all their efforts to reduce the tally proved abortive. At a stage Sweden were restricted to playing the game in their own half by a more determined Nigerian side, who were cheered endlessly by the fans.

Awoniyi scored his second goal in the 67th minute but the referee ruled out the goal.

Two quick goals from Samuel Okon and Chidera Ezeh in the 80th and 81st minute was all Nigeria needed to confirm their supremacy over their opponents in the pulsating encounter watched by former footballer of the year, Diego Maradona and FIFA officials.

With this victory, Nigeria face Mexico on Friday by 5p.m. Nigerian time.

Mexico who the Eaglets beat 6-1 in the group stage had earlier in the day defeated Argentina in the first semi final tie 3-0.

Argentina will now face Sweden in the third place match at 2pm on Friday.