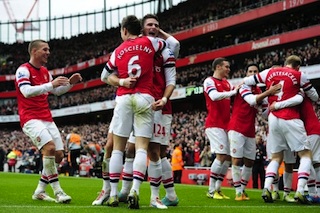 Arsenal players get revenge in Germany

English Premier League leaders Arsenal avenged their Champions League home defeat to Borussia Dortmund a fortnight ago with a 1-0 victory in Germany on Wednesday.

Having lost 2-1 at London’s Emirates Stadium, the Gunners claimed revenge at Borussia’s Westfalenstadion as Welshman Aaron Ramsey headed the only goal of the game.

“It’s a difficult place to get a result, but the fans were magnificent,” said the goal-scorer Ramsey.

“They got behind us and we managed to get the win for them.

“We were very good defensively and we were also very patient.

“It was a great away performance and a great result.”

Arsenal deserved the victory having taken their chance during a bright second-half spell, having absorbed huge amounts of first-half pressure from the hosts who had peppered the Gunners’ goal.

Their victory means Arsenal remain top of Group F on goal difference, level on nine points with second-placed Napoli, who beat bottom side Marseille 3-2 in Italy.


Last season’s Champions League finalists Dortmund, second in the Bundesliga, drop to third with six points ahead of their tricky remaining games at home to Napoli and away to Marseille.

In the build-up, Arsenal manager Arsene Wenger had targeted Robert Lewandowski — who has said he will leave at the end of the season when his contract expires — as Dortmund’s main threat but the Poland striker had a quiet night by his standards.

Towering centre-back Per Mertesacker was tasked with containing the Polish hot-shot and the German international rarely let Lewandowski out of his sight.

Dortmund’s heavy metal-loving coach Jurgen Klopp had compared Wenger’s Arsenal as a finely-tuned “orchestra”, while the Frenchman had said the game promised to deliver a “great symphony” but it was the Gunners who ultimately had Dortmund dancing to their tune.

Dortmund’s attacking midfielder Henrikh Mkhitaryan squandered a clear first-half chance when he fired wide with the goal at his mercy.

And Germany winger Marco Reus hit the back of the Arsenal net in the second half, but the goal was ruled offside.

Arsenal’s Poland goalkeeper Wojciech Szczesny had a frantic start to the first half as Dortmund turned up the pressure, but it was the Gunners who broke the deadlock.

Arsenal scored on their first purposeful attack when Ramsey headed home on 62 minutes.

Arsenal’s Germany midfielder Mesut Ozil swung in the ball on the right edge of the penalty area and France’s Olivier Giroud headed into Ramsey’s path for the in-form Arsenal midfielder to sneak in ahead of Dortmund’s Nuri Sahin to head home.

Klopp threw on pacy winger Pierre-Emerick Aubameyang for the final 15 minutes in a bid to force a crucial equaliser while Lewandowski had a clear penalty appeal turned down in the dying stages.