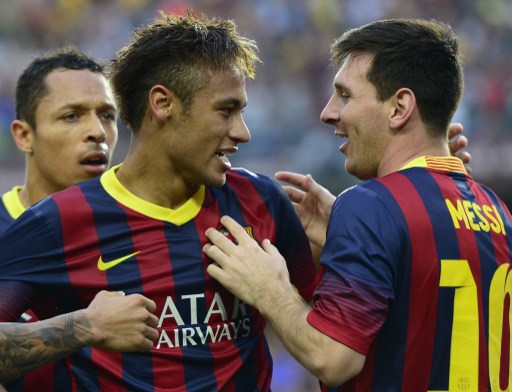 Atletico Madrid and Barcelona have qualified for Champions League last 16, even with two games remaining.

Messi ended his three-game run without a goal as he smashed home the opener from the penalty spot after Neymar had been felled by Ignazio Abate.

Sergio Busquets then headed home a second, but Milan were handed a lifeline just before half-time when Gerard Pique turned Kaka’s cross into his own net.

However, Messi made the game safe seven minutes from the end when he dinked the ball home from Cesc Fabregas’ pass.

Atletico on their part made it four victories in a row, spanking Austrian Vienna 4-0 in Madrid. Atletico have 12 points, with two matches remaining, while Zenit Petersburg are second with five points in their Group G.

Barcelona’s qualification for the round of 16, will be their 10th consecutive feat.

For Atletico, their 4-0 win over Austria Vienna earned them their first appearance in the knockout stage since the 2008/09 season.

They also registered a new club record for successive wins in Europe’s elite competition with four, beating the previous mark set by their predecessors in the 1958/59 campaign.

Holders Bayern Munich and Manchester City had qualified for the last 16 on Tuesday.