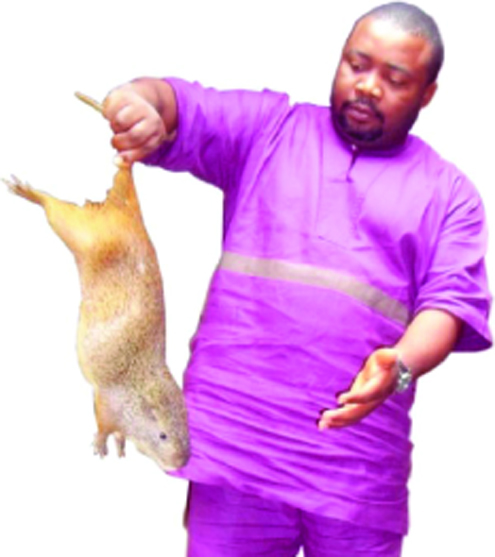 There is a saying that “if the going gets tough, only the though gets going” That aptly applies to the present economic situation in Nigeria where former breadwinners have suddenly turned jobseekers. Worse still is the fact that there are very few jobs out there in the market.

Therefore, the quest for self discovery due primarily to lack of good paying jobs has shown that one can double his/her money in less than eight months raising hybrid fast growing-specie of grasscutters. This however should be a thing of interest, as for instance a former banker who lost his job now has some money to play around with breeding grasscutters.

Joblessness and insufficient income can be a thing of the past, as you can make over 500 percent returns by investing N60,000 on grasscutter farming. Sadly Nigerians inclination to go into business in the field where thousand have already made their fortunes has led to the utter neglect of such lucrative area as grasscutter production. “if you want to succeed, strike out on new paths, rather than travel the worn paths of accepted success. Explore uncharted business paths” Grasscutter farming though relatively new in livestock farming, is a viable commercial venture. Its economic potential is high within the region and has an extensive market due to its high demand. Only few Nigerians for now have penetrated the lucrative market and reaping cool big profit without stress.

In Africa, Nigeria is the largest importer of frozen fish and meat (FDF,2002) and requires approximately 1.5million tons of fish and meat annually to meet demand.

Currently, domestic supply is about 0.5million tons (Over 30% of demand) including massive importation which gulps over N20 billion annually. Preliminary market analysis according to IFC suggests that an additional 25,000 tons or 100% increase in current production can be easily absorbed.

Cattle which could have been another major source of protein, is being drained by desert encroachment, pest attacks and other factors.

Mini-livestock farming such as grasscutter, geese, snail, guinea-fowl, antelope, guinea-pig, mushroom and rabbit is thus placed on the spotlight as the best option for food security in the country today.

At Jovana Farms we are looking inwards and focusing on the neglected, but vital sources of animal protein for household diets, export and employment generation. Therefore, our nationwide agro-seminar is intended to provide useful information on the various aspects of animal production, create awareness and thus motivate Nigerian farmers, investors, job seekers, retirees, students to get involved in animal farming ventures for income.

The grasscutter-raising business is adaptable to any location. Many owners use sheds, backyards, and old barns as sites for grasscutter hutch. With the red meat situation being what it is and the economy in turmoil now is a good time to consider the grasscutter business.

The best way I know to put good food on the table and more naira notes in your pocket without a large investment, is raising grasscutters. The profits can come in many ways. You can sell your grasscutters live or smoked to restaurants, the manure for fertilizer to horticulturists or for worm growing, even the breeding family of one-male and four-females can bring huge money. The white meat, however, is by far the most important product.

Grasscutter meat has high carcass quality and protein is comparable to sea food. The meat is recommended for patients with cardiac problems, diabetes and high blood pressure. Local demand for grasscutter meat is increasing as the people become more health conscious by avoiding the consumption of red meat that is loaded with cholesterol.

The main reason grasscutters are now preferred by some farmers for rearing purposes is because its easy to house and you don’t buy food for them like you do in fish, poultry and pig farming.

They can produce many litters. In this category, they are next to pigs and rabbits. A female grasscutter of good species can deliver up to 14 babies in a year. Another advantage is that they are efficient converters of wide range of vegetables and grass matters into meat, they have a rearing period of 24 to 26 weeks and they have a high rate of ailment resistance.

You can get started without the costly items the so-called experts say you should have. With just N45,000 to N50,000 one can kick-off with one-male and four-females depending on the age and specie. They can be reared in wooden cages which costs N10,000 each. Therefore, with N55,000 one is already in a profitable business.

Are you still playing the Thomas. If so, then you have a long waiting to do on the unemployment queue. Avoid writing hundreds, possibly thousands of job application where you “beg to apply” instead of settling down with this easy-to-start, profitable agribusiness that will help you build up your business capital, feed yourself and your family, get others employed and launch you en-route your financial freedom. The choice is yours.

Jovana Farms organizes nationwide sensitization training seminars on the practical ways of making it through small-scale animal farming. Visit us at www.jovanafarms.com for more details or call 080 33262 808, E-mail: jovanafarms.gmail.com