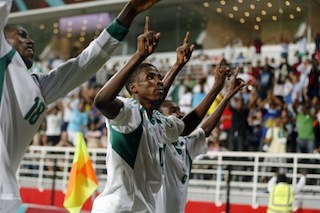 Nigeria’s Golden Eaglets on Friday evening defeated El Tri of Mexico 3-0 at the Mohammad Bin Zayed Stadium in Abu Dhabi to win the 15th edition of the FIFA U-17 World Cup hosted in UAE.

An own goal from Erick Aguirre and two others by Kelechi Iheanacho and captain of the team, Musa Muhhammed saw Nigeria lift the coveted prize for the fourth time to become the most decorated team in the history of the championship.

The match tagged clash of champions by pundits of the sports, because Mexico are the reigning champions while Nigeria were pre-match three-time champions, did not fail to live up to expectations.

It took the Golden Eaglets just nine minutes to show they meant business as Yahaya put the ball at the back of the net after he received a pass from Taiwo Awoniyi through a counter attack.

On the half hour mark, Nigerian goalie, Dele Alampasu parried a goal-bound header from Ulises Jaimes to prevent the Mexicans from levelling the scoreline.

Golden Eaglets striker Taiwo Awoniyi spurned a chance to increase Nigeria’s goal tally as he side netted with only the Mexican goalie Raul Gudino to beat.

Efforts from both sides to score more goals in the first half did not yield success before the Scottish centre referee brought the first half to an end.

The second half started with the first substitution of the match made by Mexico as midfielder Christian Tovar came off for Luis Hernandez, a striker.


It was not until in the 56th minute before Nigeria got their second goal through Iheanacho who played the ball into an empty net after Gudino failed to save a long range shot from Muhammed.

On the 58th minute, Mexico made the second substitution with own goal scorer, Aguirre making way for Marco Granados.

Nigeria made their first change in the 80th minute with defender Abdullahi Alfa leaving the field of play for Chidera Ezeh.

A minute later, Muhhamed put the game out of the Mexicans’ reach as he curled in a free kick from outside the arch into the net that gave the Mexican goalie no chance.

The referee blew the final whistle after the expiration of one minute additional time with the Nigerian players jumping in jubilation.

Speaking after the match, coach Manu Garba described the victory as a big mark for the team who were consistent throughout the tournament.

He added that the players would in the future represent Nigeria at the under 20 stage and at the senior level.

Nigeria’s Iheanacho was awarded the Addidas silver boot with his six goals and the Most Valuable Player of the tournament. Goal keeper Alampasu got the Addidas Golden Glove.

With the loss, Mexico have thus failed to win the title back to back, a feat achieved by Brazil in 1999 when they became the first nation to defend their title.

Nigeria are the most successful nation at the  tournament, having won the title three times in 1985, 1993 and 2007. The Golden Eaglets have also reached the showpiece game on three other occasions without winning the trophy.

On the other hand, the Mexicans have played in just two showpiece games in 2005 and 2011 and have won on both occasions.

Nigeria’s run to the final was only thwarted once and that was by Sweden in the group stage when they battled out to a 3-3 draw.

The Golden Eaglets coasted through to the final by going past Iran, Uruguay and Sweden in the second stage of the tournament in the UAE.

After a disappointing start as defending champions, the Mexicans recovered remarkably to reach the knockout stage. They were responsible for the elimination of Italy, Brazil and Argentina in the second stage of the tournament.