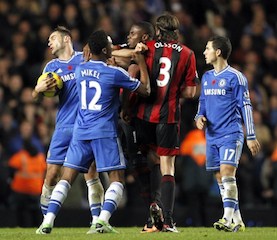 Hazard was back in the side after missing the Champions League win over Schalke in mid-week following his late return from an unauthorised trip to France.

And he confirmed he is back in manager Mourinho’s good books when he kept his nerve in the 96th minute to beat West Brom goalkeeper Boaz Myhill from the spot after Ramires had gone down under a challenge from Steven Reid.

Referee Andre Marriner took his time before awarding the spot-kick and the Albion players vigorously contested the decision.

But the outcome was that Chelsea avoided a second successive Premier League defeat and Mourinho — who was taking charge of his 100th game at Stamford Bridge; his 66th in the league — maintained his proud home record.

Chelsea had appeared on course for victory when Samuel Eto’o put the Blues ahead on the stroke of half-time after taking advantage of a mistake by Liam Ridgewell.

But second-half goals from Shane Long and Stephane Sessengnon overturned that advantage to give the visitors hope of an unexpected win, only for fortune to desert them at the death.

The result meant Chelsea dropped from second place to fourth in the table, but Mourinho and his players knew it could have been worse.

Albion manager Steve Clarke was Mourinho’s assistant during the Portuguese’s first spell at Chelsea and the spirit of mutual respect appeared to have extended to both groups of players during a pedestrian opening half hour.

Chelsea’s dominance of possession was such, however, that it was inevitable the home side would eventually test Myhill and the Wales international was forced to react sharply to tip away Oscar’s free-kick after Hazard had been fouled by Claudio Yacob.

But there were few signs that either side would claim a first-half advantage until Ridgewell switched off in added time and allowed Eto’o to pounce.

Myhill had produced an excellent full-length save to parry Hazard’s angled shot and Ridgewell should have cleared immediately when the ball rolled to his feet.

Instead, the Albion left-back paused for long enough for Eto’o to stab his left foot at the ball and send it into the empty net.

Albion’s defensive efforts deserved better, but having gone behind, it was clear they would face a challenge to force a way back into the game after an ineffective attacking performance during the opening 45 minutes.

The task confronting them looked as though it might get a lot harder immediately after the restart when Hazard raced clear to receive Oscar’s long ball, but the Belgian’s first touch let him down.

And having escaped that scare, Clarke’s side began to take the initiative.

There was a clear sign they were capable of unsettling the Chelsea defence when Long got ahead of John Terry to head against the post from Morgan Amalfitano’s 56th-minute cross.

Gareth McAuley rose above Branislav Ivanovic to send a powerful header at Cech, who parried the ball back into the six-yard box and Long headed home from close range.

Then, Ridgwell atoned for his earlier error by squaring the ball for Sessengnon, who wrong-footed Terry 16 yards out before beating Cech with a low drive.

Chelsea laid siege to the visitors’ goal as they searched for an equaliser, and after Myhill saved superbly from Ivanovic and Willian headed over from close range, Ramires’s collision with Reid allowed Hazard to strike.