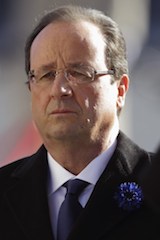 A solemn event presided over by French President Francois Hollande to remember those who died in World War I turned into a shouting match Monday after protesters booed the unpopular leader.

Protesters shouted “Hollande resign” and “Socialist dictatorship” as the president was driven up the French capital’s famous Champs-Elysees avenue, to the anger of others who had come to commemorate the millions killed during the devastating 1914-18 war.

“You have no right to exploit November 11. You’re a disgrace for France!”, screamed one onlooker at the Remembrance Day ceremony.

Scuffles broke out between protesters and security forces, and police said nearly 70 people had been detained, some of whom were linked to far-right movements, including a grouping called the “French Spring” that opposes France’s gay marriage law.

Some of those shouting slogans against Hollande were wearing red bonnets, headwear that has come to symbolise a growing feeling of despondency over rising taxes and record unemployment in France.

The so-called “red bonnet” movement emerged last month in the hard-hit agricultural region of Brittany, where people took to the streets wearing the hats in reference to a famous 17th century “Red Bonnet Revolt” against tax rises.

But Christian Troadec, a spokesman for the Breton movement, condemned the Paris protesters, saying they had “nothing to do with our movement.”

Undeterred, Hollande continued his procession along the avenue and laid a wreath of flowers in front of the Tomb of the Unknown Soldier, in memory of all the soldiers who died during the war.

In the southeastern town of Chateaurenard, the mayor and two other people were assaulted and stabbed during Remembrance Day ceremonies, police said.

According to an initial probe, the attacker had mental health problems.