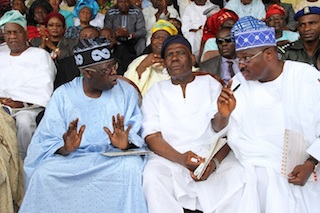 The events were held in commemoration of the first anniversary of the death of the former governor of the state, Alhaji Lamidi Adesina

LAM died November 11 2012 at St. Nicholas Hospital in Lagos after a brief illness.

While the family of Lam Adesina, led by his eldest son, Ayo Adesina, held a public lecture and launching of Ayo Lam Care Foundation in his Felele, Ibadan residence, the other event at the Lekan Salami Stadium was organized by Governor Abiola Ajimobi.

The two events were attended by dignitaries from across western Nigeria.

At the two occasions, the virtues of the late politician were extolled as he was described as a Yoruba leader who dedicated his life to the cause of the common man.

At the Adamasingba event, Governor Aregbesola and Chief Koleoso canvassed for the second term of Governor Ajimobi.

In his speech, Governor Ajimobi appealed to opposition elements within the APC to forgive him and work with him for the success of his second term bid stressing that division in the party could make APC lose 2015 governorship election to another political party.

Earlier in the day, Governor Ajimobi swore-in twelve commissioners approved last week by the Oyo State House of Assembly for the state.

The commissioners comprised five members of the former cabinet and seven new ones.

One of the new commissioners, Princess Oyefunke Oworu, a daughter to Soun of Ogbomosho, Oba Oladunni Oyewumi Ajagungbade III, was a former Special Adviser to the Governor on Trade, Investment and Cooperative.

Another newly appointed commissioner is Prince Gbade Lana, the son of Olubadan of Ibadanland, Oba Samuel Odulana Odugade 1. He was the Chairman of the State Library Board before his appointment as a commissioner.