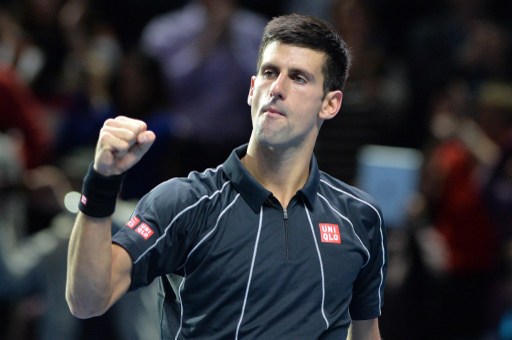 Novak Djokovic in a masterful display of tennis artistry showed in London Monday night that he has the DNA code of World Number one, Rafael Nadal. Djokovic, the defending champion, demolished Nadal in two straight sets 6-3, 6-4 at the ATP World Tour Finals.

The Serbian world number two outclassed Nadal in recording more aces– 6 to Nadal’s one and 19 winners to Nadal’s nine.

Djokovic has now won the prestigious season-ending event three times and is the eighth player to successfully defend the Tour Finals title.

The 26-year-old has also equalled Nadal for the longest winning streak of 2013 after claiming his 22nd successive victory since losing to the Spaniard in the US Open final.

Djokovic’s seventh title of 2013 went some way to avenging that painful loss in New York and eased the frustration of surrendering his place at the top of the world rankings to Nadal.

He has now beaten Nadal 10 times in 19 finals, while extending his winning run at London’s O2 Arena to 10 matches since losing to Janko Tipsarevic two years ago.

For Nadal, this was his second defeat in the final of the Tour Finals after a 2010 loss to Roger Federer and the wait goes on for his first title at the tournament.

The defeat also means Andre Agassi remains the only man to have won all four Grand Slams, an Olympic gold medal, the Davis Cup and the Tour Finals.

While it brought a frustrating end to Nadal’s campaign, nothing could detract from his superb return from a career-threatening knee injury to win 10 titles, including the French and US Opens, over the last 10 months.

It was fitting that the final of the season’s last singles competition should feature the top two in the world rankings, but it was Djokovic who stole the show.

Although Nadal went into the final with a 22-16 edge over Djokovic in their 38 meetings, the Serb had won 12 of their previous 19 clashes on hard courts and his extra quality on the surface shone through again.

Nadal had swept through to the final for the loss of just one set in his four victories, but Djokovic had matched him win for win and could also take heart from his triumph in their last meeting in the Beijing final in October.

Djokovic knew he had to counter Nadal’s destructive groundstrokes if he was to subdue the Spaniard’s aggressive game-plan and he was quick to seize the momentum, winning seven of the first eight points and breaking in his opening service game to move 2-0 ahead.

With Djokovic defending superbly and then coming up with some searing winners from the baseline, it took four games before Nadal finally got on the scoreboard.

At the first sign of Djokovic’s intensity levels dropping just a touch, Nadal pounced and on his third break point of the fifth game as he pressured the Serb into dropping his serve.

But Djokovic regained the initiative in stunning fashion, ending a breathtaking rally, which included a brilliant lob and some remarkable agility from the Serb, to break and take a 5-3 lead.

The conclusion of that point brought a jubilant roar from Djokovic and moments later he was clenching his fist in celebration again after serving out the set with an ace.

Djokovic, firmly in the ascendency now, showed why he is the only player in the world who can overpower Nadal on a regular basis as he broke in the third game of the second set.

Faced with Djokovic’s incredible ability to get back into points that should be beyond him, Nadal was looking increasingly frazzled.

The Spaniard had hit just four winners in the whole match by midway through the second set.

Djokovic could see the finish line in sight and after two match points slipped away, he finally delivered the knockout blow at the third attempt.