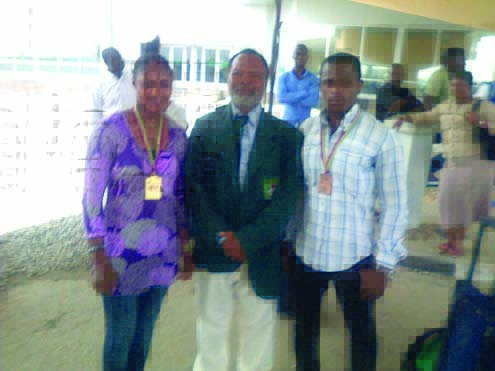 The Nigerian contingent to the Mauritius International Judo Open returned to the country yesterday with two medals.

Eniafe Alabi Solomon, who competed in the 60kg male category won a bronze medal, while Esther Augustine won a gold medal in the female 63kg category.

The two judokas who arrived Murtala Mohammed Airport, Ikeja, Lagos yesterday’s afternoon in company of the secretary general of Nigeria Judo Federation, Mrs. Nkana Mbora and Coach Edokpolor Ihaza, said that they had a good outing while in Mauritius as they competed with judokas from 18 other nations across the world.

“It was a good outing for us because we competed with judokas who prepared very well more than us. But I’m so glad that despite this we still returned with medals. I want to thank the federation and the leadership of National Sports Commission, NSC that sponsored our trip to the competition. I wish judo is included in the forthcoming Commonwealth Games so that we can show what Nigerians have in stock,” said Solomon.

To Augustine who returned with a gold medal, “the tournament was an eye opener for me. It was not easy at all but I thank God and the support from the federation and the NSC. I fought with judokas from Mauritius, Cameroon and a Briton to win the gold medal.

“This was a good competition because it afforded me to get more points to improve my rating. I was able to get 100 points from the Mauritius Open and I hope to get more if I can get the chance to compete in future qualifying tournaments for the Olympics. There will be another competition in Dubai in the next two week, I hope I will be opportune to be there because a judokas can only get better if he or she attends regular competitions.”

Coach Ihaza said that “the tourney was a success because my judokas surprised my expectations. I thank God and the authorities for their assistance. It is good for these judokas to go out to expose themselves to the modern trends in the game because the sport is changing by the day.”

The Director, North Central zone of the Nigeria Judo Federation, NJF, Alhaji Suleiman Damisa told P.M.NEWS Sports that he was happy that the judokas did not disappoint the confidence the federation reposed on them before going to the tournament.

Damisa was one of the officials of the federation who was on grouhd to receive the judokas and the officials when they returned from the Mauritius Open.

“I’m so glad with the performance of the judokas because despite the unfavourably condition, they went to the championship and came back with medals. I’ve always saying it that we have good talents that have what it takes to be world champions in Nigerian judo, they only need our support both from the government and the private sector.

“I want to say that on behalf of the federation, I thank the athletes for what they did and I believe that the sky is their limit in the future,” said Damisa.