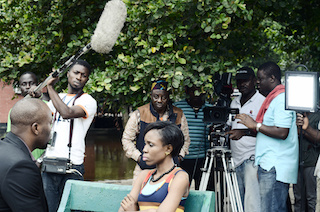 Kemi Lala Akindoju, one of Nigeria’s famed professional actors, shines in the latest Tunde Kelani movie ‘Dazzling Mirage’, which is now in post-production. She plays a leading role, along with Kunle Afolayan.

Mirage is the story of a talented, beautiful young sickle-cell sufferer who overcomes social stigma, prejudice and her own low self-esteem, to achieve success, marriage and motherhood.

The actress is known mostly for her work on stage with plays like The V Monologues and Ola Rotimi’s The Gods are not to Blame. This year, she made her pivot to the screen with box office hit ‘Alan Poza’ and a steady role on MNET Series, Tinsel. Lala is also Casting Director for GTBANK Ndani’s ‘Gidi Up’.

Kemi Lala Akindoju is one of the most talented young actresses working in Nigeria at the moment.

She studied Insurance at University of Lagos and also holds a master’s degree in Media and Communication from the Pan
African University. She has appeared in over 70 stage productions, playing roles such as Amope in Wole Soyinka’s Trials of Brother Jero, Ojuola in Ola Rotimi’s The Gods are not to Blame, Sizwe in Athol Fugard’s Sizwe Bansi is Dead, and Iyaloja in Wole Soyinka’s Death and the King’s Horseman. In 2010, she won the award for Actor of the Year at The Future Awards – on the strength of her performance as a stage actor.

Photos from the movie set released by the producers today are below.