US tallest skyscraper opens on site of World Trade Centre 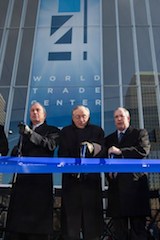 America’s tallest skyscraper built on the site of the former World Trade Centre, whose iconic Twin Towers were destroyed in the 9/11 attacks, was inaugurated Wednesday.

Four World Trade Center is the first office building to open on the original 16-acre (64,750 square meter) site known as Ground Zero where more than 2,700 people lost their lives.

The new building replaces the South Tower of the former World Trade Center.

On September 11, 2001, two airplanes hijacked by Islamic militants slammed into the Twin Towers, leading to their collapse. In addition to causing widespread loss of life, the attacks also damaged nearby buildings.

The World Trade Center was the target of a previous attack on February 26, 1993, when a bomb exploded in an underground parking lot, killing six people and injuring more than 1,000 others.

The new tower consists of 72 floors, stands 297.7 meters tall and has mirrored windows, according to the WTC website. Building began in 2008.

“The design of 4 World Trade Center has two fundamental elements — a ‘minimalist’ tower that achieves an appropriate presence, quiet but with dignity, and a ‘podium’ that becomes a catalyst for activating the surrounding urban streetscape as part of the revitalization of lower Manhattan,” Maki said.

A third of the offices in the building will be occupied by the port authority of New York and New Jersey.

The most spectacular tower of the new complex is One World Trade Center, often referred to as the Freedom Tower, which has 104 floors and was deemed Tuesday be the tallest US skyscraper once it is completed. It is slated to be inaugurated next year.

Once finished, the new World Trade Center will consist of five skyscrapers, as well as a 9/11 memorial and museum, a public transportation center, some 550,000 square meters of commercial space and an artistic space.