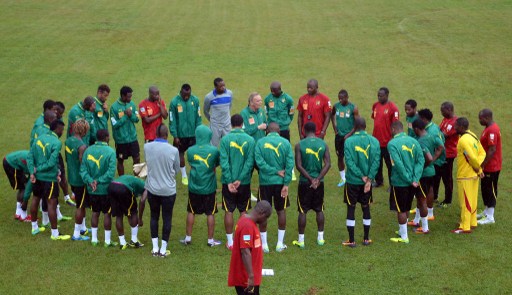 Cameroon have taken Africa’s third spot in the 2014 World Cup in Brazil, for an African record seventh time on Sunday.

The Indomitable Lions, which was absent at the last World Cup in South Africa, thrashed Tunisia 4-1 in the decisive second leg of the play-off in Yaounde today.

Jean Makoun, who plays as a midfielder for Stade Rennais in France had a brace, while Benjamin Moukandjo, of Nancy and Pierre Webo of Fenerbahçe SK of Turkey also scored for the Cameroonians.

Tunisia’s only goal by Ahmed Akaichi came in the 51st minute. Tunisia booked the playoff against Cameroon, after FIFA disqualified Cape Verde for fielding an ineligible player, during the group stage.

Playing under the the Yaounde sunshine, Cameroon wasted no time in taking the advantage after last month’s goalless first leg in Rades.

There were just three minutes on the clock when Pierre Webo pounced on a defensive mix-up by the Tunisians, firing across goal, the ball bouncing in off the post.

But it took a majestic goal on the half-hour by Benjamin Moukandjo to give the Indomitable Lions breathing space as Tunisia paid the price for sitting back and letting the home side carry the game to them.

Moukandjo, brought in to add width and pace on the left, produced just that, collecting the ball and with a burst of speed, glided through three defenders and fired an unstoppable shot past Moez Ben Charifa from the edge of the area.

But his over-exuberant celebrations, which saw him rip off his shirt and race in to the crowd, brought him a booking.

There seemed no way back for Tunisia and they did nothing in the first half to test Charles Itandje in the Cameroon goal, whose heroics in Rades set them up for the second leg.

The visitors’ only significant foray forward saw Wissem Ben Yahia swing in a free-kick from the right side only for the unmarked Syam Ben Youssef at the back post to head over with the goal at his mercy.

Tunsia’s Dutch coach Ruud Krol, who was drafted in at the last minute to fire up the team for the return leg, appeared to have pulled off a masterstroke by throwing on striker Ahmed Akaichi as a half-time substitute for Amine Chermiti.

Just four minutes into the half Akaichi produced a perfect finish, chasing a long through ball and powering a first-time volley beyond the reach of Itandje from the edge of the area.

But Makoun restored the Lions’ two-goal advantage, rising above the defence to head home Benoit Assou-Ekotto’s corner in the 65th minute and wrapped it up four minutes from time when he slotted home the rebound after substitute Eric Choupo Moting’s shot hit the post.