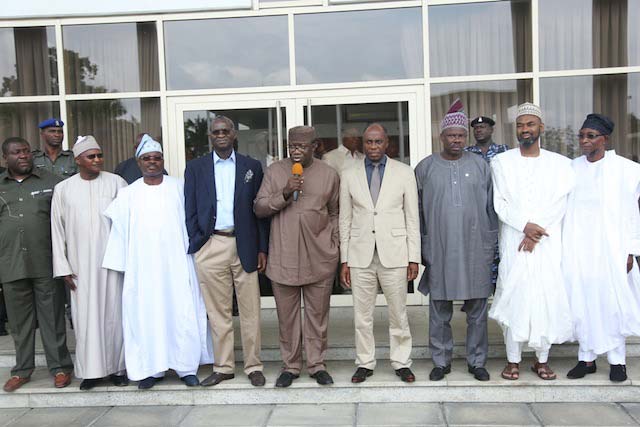 Amaechi, centre, with some members of the NGF

The Nigeria Governors Forum (NGF) led by Governor Rotimi Amaechi has appealed to Nigerians to eschew docility by participating more actively in politics and demanding better accountability and responsibility from their leaders.

The forum gave the advice in a communique issued at the end of a retreat in Sokoto on Saturday.

The NGF also emphasised the need to develop a National Security Framework for the country.


It also seeks the evolution of a roadmap for pursuing the Nigerian dream and promoting and sustaining a people-centred approach to deepening democracy and federalism in the country.

“In view of the opaque nature of NNPC operations, we continue to insist on transparency in all facets of the petroleum value chain,’’ the communiqué said.

It reiterated the demand for State Police as a requirement of a federal system of government and a multi-level policing to improve on the security of citizens.

The communiqué also encouraged the promotion and protection of rights of marginalised groups, such as the physically challenged, through legislation by the National Assembly.

It emphasised good governance anchored on a framework of ethics, values and political morality to drive development with a view to leaving a durable legacy of democratic governance,

The document encouraged the involvement and participation of citizens, especially youths in governance as part of the legacy of democratic rule.

It stressed that governors would persist in efforts to ensure more effective devolution of powers to safeguard democracy and promote rapid development in the country.

It said this would be achieved through; “ amending ordinary legislation such as the FRSC Act, NIWA Act, Value Added Tax Act, Police Act and Federal Housing Authority ( FHA) Act, among others.’’

It further stressed the pursuit of diversification of the country`s economy to reduce dependency on oil.

It also emphasised the need to reinforce efforts at enhancing internally generated revenues to lessen states’ dependency on the centre as a way to strengthen federalism in the county.

The Communique was signed by Gov. Amaechi on behalf of other governors who form the forum`s membership.

Kwara, Kano, Oyo, Niger and Jigawa states were however represented at the retreat by their Deputy Governors.

Governors of Yobe, Borno, Edo, and Ogun states were not at the retreat.

In an opening remark at the retreat, Amaechi urged Nigerian leaders to make conscious efforts to address the myriad challenges facing the country.

“Nigeria is faced with lots of challenges which can only be overcome if her leaders make conscious efforts to do the right thing.This retreat is coming at the right time in our national life when we, as leaders, must live up to the expectations of the electorate,’’ he said.

He, however, condemned the level of sycophancy in the country, saying that the governors were aware that the development was inimical to efforts to ensure good governance and development in states.

He said that a situation where sycophants lauded non-performing leaders was not encouraging, adding that the development was somewhat responsible for the bad service delivery of some leaders.

The governor stressed the need to put in place some indices to evaluate the service delivery of those in government, adding that this would spur development across the country.

Amaechi, who thanked Gov. Aliyu Wamakko of Sokoto State for hosting the retreat, also commended him for the laudable development projects in the state.

“Peer learning is our major hallmark in the Forum and there is no doubt that we would learn a lot from Sokoto State,’’ he said.

Wamakko, in his welcome address, said that it was the responsibility of all the citizens to propel the country to a greater height.

“However, at this material time, those of us, who have the mandate of our people, should bear the full brunt of the country’s challenges and sacrifices,’’ he said.