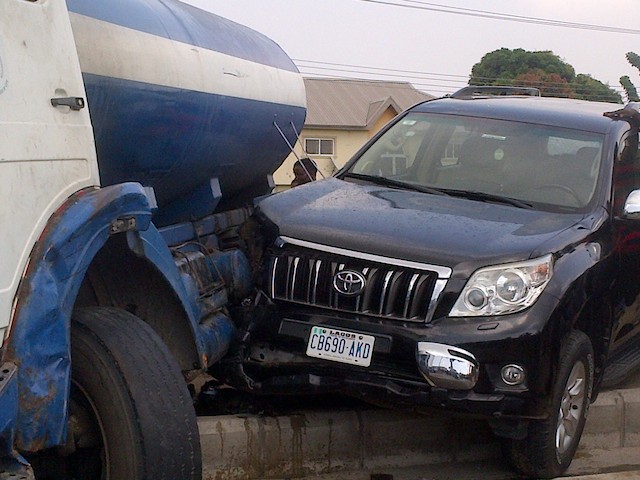 The killer truck and the Prado jeep that trigger Assembly proposal

The Lagos State House of Assembly, western Nigeria has said it would use its powers to ensure that five pedestrian bridges are proposed by the state government for Eti-Osa in the 2014 budget before the House.

The resolution followed a Matter of Urgent Public Importance brought to the floor by Alimi Kazeem Ademola, the representative of Eti-Osa Constituency 1 over the killing of a pupil by a water tanker in the area.

Ademola, in his explanation, said that the pupil and his mates were on their way to their school and that as they made to cross the expressway, the tanker, which apparently had lost its breaks hit them killing the pupil and injuring the others.

He said he had championed the call for the creation of pedestrian bridges in the area because of the risks the residents in the constituency are facing. Many of the residents build their houses along the expressway, P.M. NEWS understands.

The lawmaker explained that he had earlier met Ayo Gbeleyi, the former Special Adviser on Public Private Partnership, PPP, to the Governor of Lagos State, Mr. Babatunde Fashola, over the issue and that Gbeleyi had informed him that the state government would build five of such bridges across the corridor.

Supporting him, another lawmaker, Sanai Agunbiade, urged the House to assist the constituency saying as assemblymen, what affects one affects all.

Gbolahan Yishawu, who represents Eti-Osa Constituency 2, described the incident as a very sad one confirming that activities in the entire area was shut down following serious protest by the residents, who said they had long being clamouring for pedestrian bridges in the area.

He said the police later took over the area as “there were shootings resulting in a lock-down.”

Chief Whip of the House, Abdulrazaq Balogun, while commiserating with the people of the area, confirmed that there was a provision for five pedestrian bridges in the area.

He said the proposal could only become a reality if the House uses its powers to influence the construction.

He did not give details of the challenges that could hinder the establishment of the bridges, but emphasised that the House must play a major part if the projects must be successful.

The Speaker, while summing up discussion on the matter, promised that the House would do everything within its powers to influence the executive arm of the state government to effect the construction of the bridges.