Super Eagles in a thrilling draw with Italy 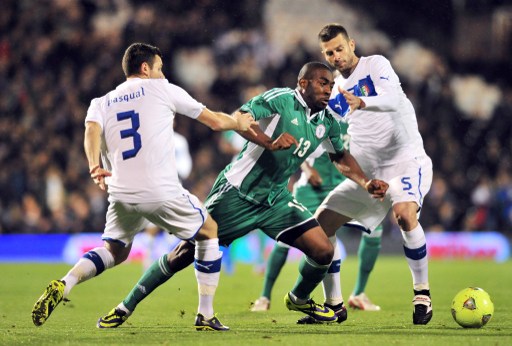 A header from Bright Dike in the 35th minute and a near post volley from Shola Ameobi in the 39th minute respectively ensured that the Super Eagles of Nigeria recorded a 2-2 draw with the Azurris of Italy in an international friendly played Monday evening at Craven Cottage, the home ground of Fulham Football Club of England.

The Italians showed class over the African champions as they dominated and dictated the flow of the game with the Nigerians chasing the ball in the first ten minutes of play.

With AC Milan of Italy forward Mario Balotelli tormenting the Nigerian defence and on the 12th minute of the pulsating encounter, the Europeans got the lead after a defensive error with Giuseppe Rossi coming one-on-one with Austin Ejide. Rossi wasted no time as he chipped the ball over the exposed Nigerian goalkeeper.

After going one goal up the Europeans became sloppy paving the way for the Super Eagles to gain some confidence with Victor Moses, who is on loan to Liverpool from Chelsea making some blistering runs on the flanks.

It was a ding-dong affair with both teams creating some goal scoring chances but the Nigerians were the most adventurous making some runs into the vital area of the Europeans.

The Nigerians were later rewarded for their intense search as Bright Dike headed in from close range from a Shola Ameobi pullout in the 35th minute to restore parity.

Four minutes later, it was Ameobi who had an assist that got his name on the goalscorer sheet as he connected nicely a pullout from Francis Benjamin to give the three time African champions the lead.

The first half came to a close with both teams making dangerous incursions into their different vital area.

Two minutes after referee Martin Atkinson restarted the encounter Italy equalised through Emmanuel Giaccherinni who was unmarked in the six yard area of the Super Eagles.

With parity restored both teams made some changes. However, the introduction of veteran midfielder, Andrea Pirlo by the Azurris eclipsed Mikel Obi’s dominance in midfield.

Pirlo’s dominance in midfield apparently forced the technical crew of the Eagles to resort to the use of long thrusts instead of their usual wing play.

Despite both teams leaving out some of their regulars the entire game still lived up to its billing as it was very competitive with referee cautioning three Nigerian players and an Italian player.

The Eagles will have Godfrey Oboabona and Ejide, who was later replaced by stand-in skipper, goalkeeper to thank as they showed some brilliance to save the day.

Alessandro Diamanti came to close getting the decider in the concluding part but his shot came off the cross bar.

The Eagles also had their chances but selfish play on the part of some players denied them the opportunity.