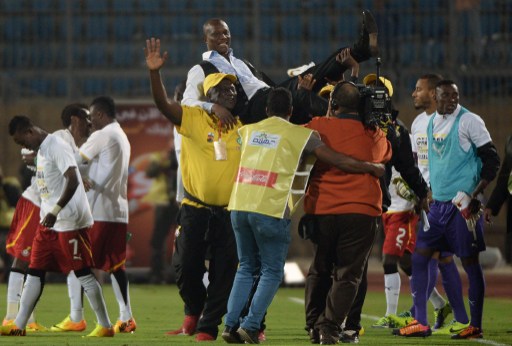 Ghana on Tuesday qualified for a third successive World Cup, securing their ticket to Brazil with a 7-3 aggregate win over Egypt.

The Black Stars, who have featured at the 2006 and 2010 World Cup finals, lost the African zone play-off return leg in Cairo 2-1 but had already done enough in last month’s first leg in Kumasi, routing Egypt 6-1.

Africa’s fifth and final berth for the World Cup will come from the play-off between Algeria and Burkina Faso, with Burkina prevailing 3-2 in the first leg.

Egypt took the lead on Tuesday in the 25th minute through Amr Zaki, who crashed his body against a free kick by Mohamed Aboutrika and Ghana goalkeeper Fatau Dauda misjudged the flight of the ball.

Substitute Mohamed Gedo doubled the hosts’ advantage when he tucked home from inside the box in the 83rd minute.

Kevin-Prince Boateng pulled a goal back for Ghana in the 88th minute, when he connected home a low cross from the right delivered by skipper Asamoah Gyan.

For Egypt, it was too little, too late as the damage had been done in Ghana last month.

This was the last chance for Egypt’s ‘Golden Generation’ of Aboutrika, Wael Gomaa and Said Moawad to appear at the World Cup after the Pharaohs’ last featured in the tournament in 1990.

Egypt stayed in the attack for most of the first half, winning corners but never really threatened their opponents’ goal.

Zaki shot at goal inside the first minute, but goalkeeper Dauda held it firmly.

In the sixth minute, Spartak Moscow striker Majid Waris threatened the Egyptian goal after he was set up by Sulley Muntari, but his low shot was wide of the post.

It was Ghana’s best chance of the first period as the home side continued to pile on the pressure for a first goal.

The Pharaohs were rewarded for their endeavour after 25 minutes after a piece of poor defending by Ghana.

But it was not until the 35th minute that Egypt again threatened when Zaki’s dipping shot from outside the box was tipped over the bar by goalkeeper Dauda for a corner.

A penalty appeal in the 41st minute for Egypt was overlooked by the Ivorian referee when it looked like Mohamed Salah had been brought down inside the box by Rashid Soumaila.

In first half stoppage time, Hazem Emam tested the Black Stars’ goalkeeper with a low shot taken from inside the box after he was released by Salah.

In the second half, Ghana tried to attack after they were pegged back in their own half in the first 45 minutes.

In the 57th minute, Aboutrika, with his back to goal, hooked a good chance from inside the box, but it narrowly missed the target.

Muntari’s free-kick in the 61st minute from outside the Egypt box was low and hard but it lacked accuracy.

Ghana goalkeeper Fatau had to come off his lines in the 68th minute to thwart Basel forward Salah, who tried to use his pace to outrun his marker.

In the 75th minute, Gedo was denied and moments later, Jerry Akaminko had to clear the ball off his line as Egypt continued to chase the game.

In stoppage time, Mahmoud Shikabala missed a sitter after he was set up by Salah to sum up the night for Egypt.