Oshiomhole suspends head of waste board 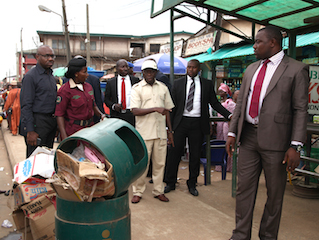 Governor of the Nigerian southern state of Edo, Adams Oshiomhole has suspended the head of the State Waste Management Board just as he directed the Permanent Secretary Ministry of Environment and Public Utilities, Major Oloye (rtd) to immediately evacuate the refuse at the median along Mission Road, Benin city.

Governor Oshiomhole gave the order during an inspection of Mission Road, New Lagos Road and Forestry in Benin City.

Governor Oshiomhole was displeased with the untidiness of the median along Mission Road and said Government will deal with those who want to sabotage his efforts.

He frowned seriously at the indiscriminate parking of vehicles both at Mission Road, and New Benin and directed the commissioner for Transport, Mr. Omo – Ojo Orobosa to tow all vehicles to Government House.

Governor Oshiomhole stopped over at the Board of Internal Revenue where he took a guided tour of facilities at the Board Secretariat.

Addressing the mammoth crowed shortly after his inspection of facilities at the BIRS, Governor Oshiomhole enjoys the people to partner with the State Government in its beautification efforts.

According to him “please tell your parents at home not to dump refuse in the drainage system, and not to trade on the walk-ways”, he said.

He said, “We have to keep Benin City clean so that every Edo people will be proud to invite their friends to Benin City” he maintained.