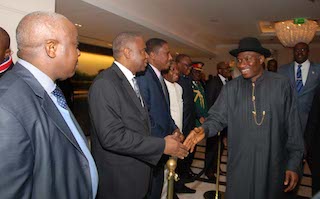 Jonathan on arrival in London yesterday

Though he was away in the UK to woo investors for Nigeria, his birthday was marked by Vice-President Namadi Sambo, secretary to the Government, Pius Anyim and members of the Federal Executive Council.

At a brief ceremony held before the commencement of the weekly meeting, FEC members presented a giant-size birthday card signed by all of them to Vice President Namadi Sambo for onward delivery to the President.

Senator Pius Anyim Pius, the Secretary to the Government of the Federation, SGF also led other Council members to cut a birthday cake for the President.

“There is no doubt the great destiny of this man has helped our individual destinies. What can we give him in return. We thank God for his life and also commend him for His guidance, protection and the fear of God. We continue to pray that Mr. President succeeds with his primary cause of transforming our dear country,” Sambo who described President Jonathan as divine gift for the country said at the occasion.

A former lecturer at the University of Port Harcourt, the President holds a BSc. degree in zoology, Msc. in Hydrobiology and Fisheries Biology and a Phd in Zoology from the same university.