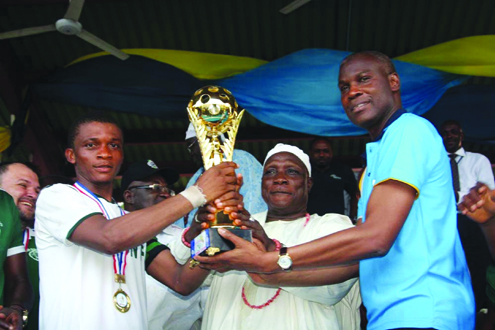 Two goals from Lawal Yusuf and Bamgbopa Bashir in the second half were all 36 Lion Football Club of Badagry needed to emerge champions of this year’s Lagos Oba Cup.

Both teams who gave good accounts of themselves but missed several scoring chances in the first half of the match. It was a different ball game in the second half when 36 Lion began to put pressure on their opponents. A  48th minute goal from Lawal sent 36 Lion fans into frenzy, while in the 52nd minute, Bashir netted the second goal for his team.

Bomb Blast who exhibited a never die quick spirit reduced the tally through Nurudeen Olusesi in the 63th minute to end the encounter 2-1 in favour of 36 Lion FC.

Coach of the winning team, Akinsola Akinrele expressed gratitude to God for the victory and boasted that his team deserved to be crowned champions.

The winner went home with the sum of N1 million with a giant trophy, while Bomb Blast received N750,000. Third place team were given the sum of N250,000.