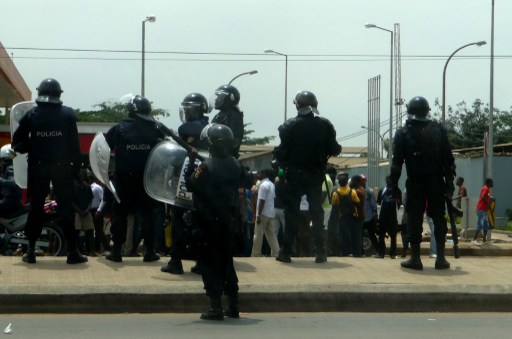 Angolan riot policemen stand in front of hundreds of demonstrators

(Reuters) – Angolan security forces shot and killed an opposition activist on Saturday, hours ahead of protests across the country where police detained 292 people.

The killing came after a tense week during which President Jose Eduardo dos Santos’ MPLA party accused the main opposition party UNITA of promoting “chaos” with its protests against the kidnap and possible murder of two activists in May 2012.

Police said presidential guards shot Manuel Ganga, one of eight members of Angola’s second-biggest opposition party CASA-CE detained in the early hours of Saturday for putting up protest posters, after he tried to flee.

“During the transfer of the group to a police station, one of them (Ganga) jumped off the vehicle and an officer made the shot that hit him,” spokesman Aristofanes dos Santos told a news conference.

“He was taken to the hospital but despite treatment he ended up dying,” he said, adding that police lamented the “unhappy incident” but that the opposition parties should not have gone ahead with the protests that the Interior Ministry had banned.

CASA-CE said Ganga had been taken aside and shot in the back by the guards.

Prosecutors said last week that Isaias Cassule and Antonio Alves Camulingui, who were involved in organising protests by former presidential guards to demand payment of wage arrears, had been kidnapped and possibly murdered in May 2012.

At Saturday’s rally in the capital, Luanda, a large police contingent fired teargas and warning shots to disperse hundreds of protesters.

“We met as planned at 0900 GMT near the cemetery but an hour and a half later police charged on us, using teargas, anti-riot and mounted police and dogs,” UNITA spokesman Alcides Sakala told reporters metres from the venue as police helicopters flew over the area.

As Sakala spoke, police charged on protesters behind him, firing teargas. Some protesters responded by throwing stones.

The police said the detentions had been made to secure public order and almost all those detained had been released.

“There were situations of roads blocked, aggressions against officers and some less good situations which made us use force in some cases, but duly controlled,” the spokesman said.

Former rebel group UNITA lost a 27-year civil war to the MPLA in 2002 and has since been trounced in two elections. CASA-CE, formed by a UNITA dissident last year, has eight seats in the 220-seat parliament.