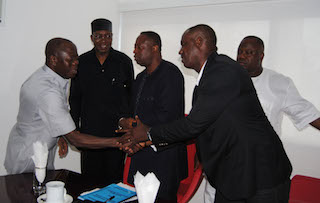 Governor Adams Oshiomhole of the southern Nigerian state of Edo has inaugurated the Interim Management Committee of the Bendel Insurance Football Club with a charge for them to reposition the club to restore its lost glory.

Speaking at the inauguration in Benin City, today, Oshiomhole said “I think that even my worst critic will agree that we have made some progress in the area of infrastructure particularly in education, roads, job creation, rural and urban electrification, provision of water even in the most difficult terrain. We made some investments in sports, the new look Ogbemudia Stadium, and several other things we have done.

“But the area in which I cannot claim to have done so much or that we have achieved anything significant is in the area of repositioning Bendel Insurance. Not because I do not appreciate the team or because I do not love football. I am fanatical about football, yet I am not able to demonstrate this passion in terms of getting Bendel Insurance to the top where it was before”, he said.

Oshiomhole disclosed that government had tried some approaches which have not worked, adding “we have been troubled by the situation in Bendel Insurance and I know that just throwing money at a problem does not solve the problem. Management goes beyond provision of money and nobody is going to give what he does not have. You cannot manage if you don’t have the skill in a particular area of business”, he noted.

The Governor asserted “we are blessed in this state with seasoned people who have made their mark not only in Nigeria but outside the shores of this country. Why should we have a collection of such and we are still in the kind of situation that we are. As they say better late than never.

“We must try and do things differently if we are going to have a new outcome. It is as a result of this that we have reflected and we need to rebuild the house from the scratch, not patching it, because at times patching a dilapidated building might be more challenging than building a new house.

“Help us to rebuild a complete new team. Whatever we can do we will do within our limited resources. But I also believe that we all know that funding football is not like funding government agencies. It ought to be as independent as possible.

“In this committee, beside the Secretary to Government who is the Chairman who we have nominated to reflect the importance we attach to this committee, one that also is strategic so that whatever you discuss, he understands the limitation of Government. He also understands the commitment of government and there would be no gap between what you want us to do and getting that conveyed to us. Otherwise this would have been for people not in government” the Governor added.

The Governor assured “we have an open mind and I have no doubt that you help us to lay the foundation for a new beginning. There are lots of issues you need to address: what is the financial status of the company. You might look at the possibility of rebuilding a new team rather than all these transfers”.

Responding, the Chairman of the Committee and the Secretary to Edo State Government, Professor Julius Ihonvbere said the committee would do all within its ability to refocus a team that was once the darling of all.

He said: “We want to assure you that we know that the tenue of this Management team is limited, we would do all we can to live up to expectations and fulfill those terms of reference that you have outlined.”
The Committee has three months to conclude its assignment.