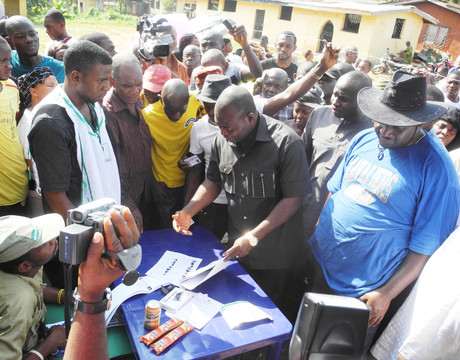 Tony Nwoye of the PDP on polling day: he could not find his name in the register

Members of a non governmental organization, Sensitization Initiative for Grassroots, SIG, has dragged the electoral umpire before a Federal High Court siting in Abuja seeking to restrain the electoral body from going ahead with the scheduled supplementary election in the state.

The plantiffs, Mr Emeka Fredrick Anagwu and Mr. Nwokedi, both executives of Sensitization Initiative for Grassroots, are asking the court to determine whether INEC, within the intendment of the provisions of sections 25, 26 and 153 of the Electoral Act, 2010, as amended, has power to declare the November 16th and 17th governorship election in the state as inconclusive.

They also want the court to determine whether the electoral umpire, by the provisions of sections 178 and 179 of the Nigerian Constitution, has power to call for a supplementary election upon the inconclusiveness of the November 16th and 17 governorship election in Anambra state.

The plaintiffs are urging the court to hold that the term “supplementary election” is alien to Electoral Act 2010 as amended and has never been contemplated under the provisions of the Nigerian Constitution.

In their supporting affidavit attached to their originating. Summons, the plaintiffs averred that after the election on the 16th of November, 2013, that INEC, through its Resident Electoral Commissioner for Anambra state, Mr. Chukwuemeka Onukogu, declared that a bye election shall take place in 65 polling units in Idemili North Local Government Area of the state and that on 17th November, after the conclusion of the bye election, that preliminary results announced by INEC’s Returning Officer, Prof James Ekpo, stated that the candidate of the All Progressive Grand Alliance, APGA, Chief Willie Obiano, scored 174, 710 to beat his closest rival, Comrade Tony Nwoye of the Peoples Democratic Party, PDP, who scored 94, 956 votes, while Senator Dr. Nwabueze Ngige of the All Progressive Congress came 3rd in the race by scoring 92, 300 votes.

They further averred that INEC stated that supplementary election shall take place in some polling units in thirteen local government areas of the state including Ayamelum, Anambra East and West, Anaocha, Aguata, Anambra South, Ekwusigo and Idemili North and that by virtue of the declaration of the electoral body, that no candidate can be duly returned or declared as winner of the election and urged the court to, in the interest of justice, grant the reliefs they are seeking.

As at the time of filing this. Report, their exparte motion with suit number FHC/ABJ/CS/791/13 filed Tuesday, 26th November, 2013 was awaiting to be assigned to a judge to hear the matter.

The candidates of the All Progressive Congress, Peoples Democratic Party and Labour Party respectively had in a joint press briefing following INEC’s announcement for the conduct of a supplementary election in the state, indicated that they may not be participating in the supplementary election following claims of substantial irregularities that characterized the inconclusive governorship election in the state.