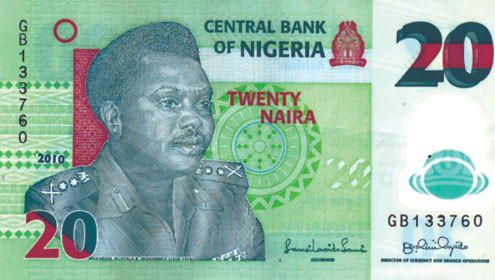 Nigeria is to revert to paper banknotes, the country’s central bank has announced, in a policy switch bucking a growing trend around the world for tougher polymer-based currency.

The Central Bank of Nigeria (CBN) signed a deal in 2006 with Australia’s Securency International to print lower more-circulated units of the naira in polymer, while higher denominations were kept in paper form.

But six years down the line — and after allegations that the manufacturer bribed foreign officials to secure contracts, including in Nigeria — the CBN said it was being forced to reverse the policy.

“Polymer has been on a test run since 2007. This explains why we did not go the whole hog by printing all the notes in polymer,” central bank spokesman Ugochukwu Okoroafor said.

“We soon discovered that the (polymer) notes easily fade out because of our peculiar hot climate in Nigeria… making them look tattered when in use over time.”

Earlier experiments indicated that the polymer-based notes, which are in use in 23 countries around the world, including Australia, could last longer than traditional cotton-paper notes.

But Nigeria’s central bank said there had been a public outcry about the poorer quality of some of the new currency in circulation.

Securency International was reported to have supplied 1.9 billion of its Guardian brand polymer-based notes to Nigeria between 2006 and 2008.

In the wake of the bribery claims, the Reserve Bank of Australia sold its 50 percent stake in the firm.

Innovia Security, which bought out Securency International earlier this year, said it did not comment on clients or their business but added that a number of countries with hot and humid climates used their product.

“We have had no issues of premature ink wear or colour fading in these markets,” a spokesman said in an emailed statement.

Nigeria, whose economy is predominantly cash-based, is looking to increase people’s use of electronic payment methods such as credit cards, online trading and introducing cashpoint machines in a bid to try to reduce the amount individuals carry around at any one time.

However, there are concerns that switching back to paper notes is a sign of a lack of a coherent policy.

“My concern is that Nigeria is fond of policy somersaults,” said Moruf Akamo, a former banker.

“What becomes of the initial investment in the polymer technology, considering that the notes have been in circulation for only six years after their adoption in 2007?”

Akamo said the CBN should have done more research to ascertain the feasibility of polymer notes before starting the project.

“Why is Nigeria going back and forth? It’s time our policy makers got their acts together and do what is right for this country,” he said.

Yemi Adegbola advised the central bank against spending money to print paper notes, which can degrade quickly with daily handling and the tropical climate.

“I can’t see any logic in going back to paper notes,” said Adegbola, a treasury manager at a commercial bank in Lagos.

“The trend worldwide is to embrace polymer. I wonder why Nigeria’s case is different?” he added, claiming that polymer was less susceptible to forgery.

“It’s not easy to fake polymer notes like paper notes,” he said.

“Nigeria is broke. The states are finding it difficult to pay their bills. We can better utilise our limited resources rather than waste such on a white elephant project,” she cautioned.

The CBN, however, said the switchover, likely from the middle of 2014, would not be a drain on the country’s finances and would be gradual.

“What we have decided is to switch over to paper notes when we next want to print naira notes,” said Okoroafor.

“When the polymer notes in circulation become tattered and ready to be disposed of, we will start the printing of paper notes.”

New paper notes will be printed locally by the state-run Nigerian Security Printing and Minting Company rather than abroad, he added.