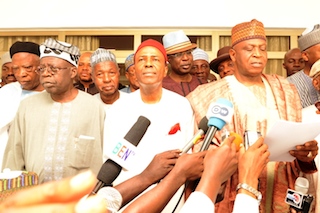 Prince Eze Chukwuemeka Eze, the publicity secretary of the breakaway faction of the PDP, has retracted a press statement credited to him stating that the merger between the group and APC, was still on hold.

Eze categorically denied issuing the statement, which was widely circulated by the News Agency of Nigeria.

“It has been brought to my notice that a statement denying the merger between the New Peoples Democratic Party (nPDP) and the All Progressives Congress (APC) has been credited to me and my office. I was quoted as saying that the MOU between the two parties is yet to be signed and because of this the merger is yet to be effected.

“I wish to state that no such statement was at any time issued by me or my office. Instead, I wish to reiterate that the MOU between us and APC has been duly signed by both the nPDP National Chairman, Alhaji Abubakar Kawu Baraje, and the National Chairman of APC, Chief Bisi Akande.

“In this regard, the general public should disregard any statement from whatever source which tries to give the impression that the merger between us and APC is in danger. The truth in that the merger is waxing stronger by the day and that our resolve to save our fledgling democracy is unshakable.

“As we stated in our press statement of yesterday, President Goodluck Jonathan and the PDP leadership should come to terms with the fact that PDP is now an opposition political party and Jonathan should start writing his handover notes as APC is fully set to take over the Aso Rock Presidential Villa in 2015 so as to give Nigerians the dividends of democracy they have been yearning for.

Eze also reacted to reports that members of the National Assembly that have defected to the APC will lose their seats.

“This cannot happen as it will be at variance with the relevant sections of our Constitution and Electoral Laws that guarantee members of the National Assembly safety once their parent party is in crisis as PDP is at the moment.

“For the avoidance of doubt, there is no danger of their losing their seats as made clear by sections 68(1)(g) and 109(1)(g) of the 1999 Constitution of the Federal Republic of Nigeria (as amended) in relation to the status of members of a legislative house (state and national) who defect from the political parties from which they were elected to join another political party.

“The wordings of the aforesaid sections are in agreement with those of sections 64(1)(g) of the 1979 Constitution of the Federal Republic of Nigeria given judicial interpretation by the Supreme Court in the case of FEDECO Vs Goni (1983) FNR 203. This case was argued by the best legal minds of that era (Chief FRA Williams SAN and GOK Ajayi SAN). The court held that such a member keeps his seat if his defection is as a result of a division or split in his party.

“In this regard particularly now that we have the majority in the National Assembly our members in the National Assembly should express no fear as they are well protected and covered by the Constitution of the Federal Republic seeing that Alh Bamanga Tukur and his cohorts have succeeded to split the PDP into old and new PDP and are free to join any party of their choice”.