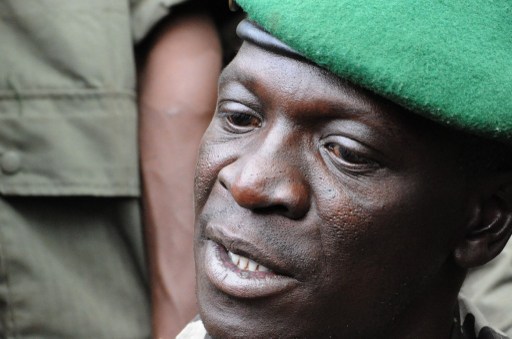 Amadou Sanogo, who led a March 2012 coup in Mali, was detained Wednesday for questioning by a judge investigating alleged abuses committed by his followers.

Several dozen Malian soldiers forcibly entered Sanogo’s residence in central Bamako, escorted him outside and drove him away, an AFP journalist witnessed.

“He was refusing to appear before the judge. So we came to carry out a warrant for his transferral,” one of the soldiers told AFP.

Sanogo was ordered in October to answer questions about deaths that occurred during a mutiny against him at his former headquarters in the central town of Kati, near the capital Bamako.

He ignored the summons, sparking indignation among Malian politicians and activists.

Sanogo was controversially promoted from captain to lieutenant-general in August, prompting fellow ex-junta members also seeking promotion to mutiny at his Kati barracks, and forcing the army to intervene.

The bodies of three missing soldiers were subsequently discovered in and around the barracks and around 20 officers, including Sanogo’s former deputy, were arrested.

Sanogo led a group of mid-level officers to overthrow then-president Amadou Toumani Toure on March 22 last year, upending what had been considered one of west Africa’s flagship democracies.

The coup precipitated the fall of northern Mali to militants linked to Al-Qaeda, but an intervention by French and African troops in January chased the rebels from the region’s main cities.

In the months that followed the March coup, the Kati barracks were the site of numerous atrocities allegedly committed by his men against military considered loyal to the ousted president.

In May last year, Sanogo and his former junta were granted a general amnesty and the captain received the status of former head of state, with all the accompanying benefits.

That status was later withdrawn, but Sanogo then leapt from the rank of captain to general in August.

Human Rights Watch described his promotion as a “shameful act” and argued the former captain should have been investigated for alleged involvement in torture.

Sanogo last month left the barracks in Kati to move into the new residence in the capital.