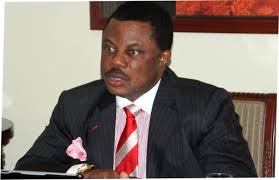 Rep. Uche Ekwunife, a governorship aspirant under the platform of All Progressives Grand Alliance in Anambra state, has withdrawn her case challenging the candidature of Chief Willie Obiano, APGA’s candidate in the state’s governorship polls,

However, Ekwunife, in a statement issued in Abuja on Thursday, said that she was withdrawing the case due to “pressure and in the interest of the party.

“I withdrew the suit in deference to pressure from my family, my state governor, friends, colleagues, clergymen, royal fathers, well-wishers and the larger interest of our great party, APGA. I have instructed my lawyers to terminate forthwith Suit No. GHC/ AWK/CS/ 281/2013, which we instituted at the Federal High Court, Awka. I also dissociate myself from all other suits, in any form or colour, against our party’s candidate, Chief Willie Obiano, by any person or persons, group or groups before now or in the future.

“May I use this opportunity to affirm my loyalty to our governor, the National Chairman of our great party, our candidate, Chief Willie Obiano, and the APGA family,’’ she said.

The legislator said that she was also took the action because she believed that it was only God who anointed kings.

In the suit, Ekwunife urged the court, amongst other prayers, to declare her as the bona fide candidate of the party in the November 16 governorship election, which was inconclusive.