Double Your Income With Pig Farming 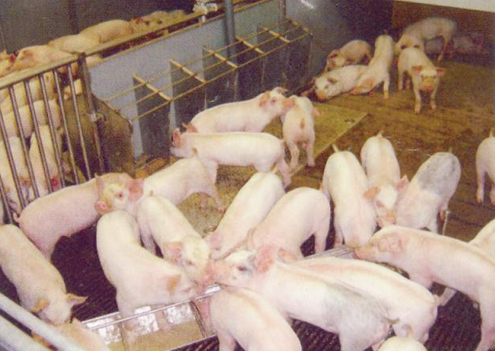 Rearing pigs may not appear as classy as manufacturing or being in the financial services sector, but it’s very profitable. A lot of Nigerians heading for the urban areas in search of scarce white collar jobs would make money if they joined the little league of wise Nigerians investing in pig farming.

Pig meat is a delicacy and it is served in big hotels, beer palours and restaurants as well as some joints patronized by the highly placed.

As unemployment incases with more jobs being threatened, people keep seeking for things to do besides their jobs that will help support the families and since 70% of Nigerians live below one dollar/day, to improve standard of living, it make sense to diversify time, resources and energy into other productive areas. And pig farming, because of its high multiplication and turnover has proven to be one of such areas. Pig farming is one of the simplest ways to earn good money. Apart from achieving the dream of becoming your own boss, it’s a business that can generate millions of jobs for our people.

No government can create enough jobs for its citizens. Government creates enabling environment while the people create jobs themselves. It’s agriculture that creates the highest number of jobs in the society.Our economic and financial system needs to be restructured to empower the average citizen. Someone who wants to invest in agriculture needs to be able to take small loan from bank and start especially Piggery that’s prolific.

Pig is a monogastric animal. At a time, pig rearing was not very popular in the country because it was considered to be a dirty animal and a secondary host for tapeworm which may be transmitted to humans. However, studies have shown that these problems occur when the free-range system of rearing is adopted in pig farming. Nowadays the intensive pig rearing is clean and attractive. It is because of the poor method of keeping them that makes them to be considered dirty. Under the extensive system pigs are allowed to wander about and fend for themselves in dirty marshy areas eating any waste materials and rubbish they can find. They’re therefore exposed to and infested by endoparasites, which result in high mortality of the piglets. But, the modern intensive pig farming system on the other hand, the pigs are prevented from many disease and infestation by endopararsites because they are denied the freedom to go out and eat rubbish.

Pigs are reproductive, if well managed; they can farrow thrice in a year with multiple babies. Or how best could you explain an animal farming that gives you quadruplet of the initial investment within seven months? .Yet no special skill is required.

Traditionally, it’s believed that pigs are dirty and can eat anything including carrion but this belief is a mere prejudice. In farms they are hand fed and not allowed to drink dirty water or eat carrion. Pig forage and root for food and will eat a wide range of vegetable, pasture, breweries, etc.

Pig farming can be carried out on a small area of land safe from flooding. When laying concrete, make sure levels are correct to avoid stagnant water. It is important that when going into piggery; you choose the most reproductive and fast growing species that is now available for sale at Jovana Farms, some breeds give birth to up to 17-20 piglets and some 8-12 piglets and some breeds grow faster than others.

The gestation period in pig is 115days; so they reproduce regularly to provide income for the farmer. The business requires patience. Anyone who wishes to go into pig farming must have passion for the business. Feeding pigs takes a period of 7-months before they mature for selling. You need to start with the weaners and they go for about N7,000 while pregnant pigs are sold for N40,000. Those who don’t have good knowledge of the business can end up feeding their pigs for 10-months and get just 50kg. But if you really understand the nitty-gritty of pig farming, at 7-months after weaning, you can get 80kg to 100kg. Pigs are sold according to their weight. If a pig weighs 90kg that means it will be sold for N27,000 at the rate of N300 per kilogramme.

Jovana farms organizes nationwide sensitization  training seminars on the practical ways of making it through small-scale animal farming. Visit us at www.jovanafarms.com for more details. Choose also the nearest venue from the advert box in this page or call 080 33262 808, E-mail:[email protected]