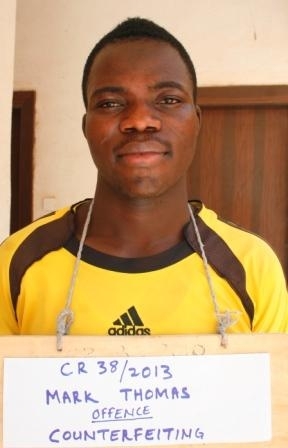 A Nigerian Federal High Court sitting in Gombe, Gombe State presided over by Justice Babatunde O. Quadri, on Friday November convicted and sentenced one Mark Thomas, a photographer residing at Buba Shongo quarters Gombe, to two years imprisonment for being in possession of counterfeit currency.

Thomas was arrested on the 8th of October, 2013 by men of the Department of State Security Services and brought to the EFCC Gombe Zonal Office.

During investigations, Thomas revealed that he produced the notes using a photocopier, which he claimed was stolen from him by unknown persons before his arrest. Forensic analysis confirmed the said currency notes to be fake as they had no security markings. Some of the N1000 notes had no serial numbers and three of the N500 notes have same serial numbers.

The convict who was first arraigned on the 19th of November, 2013 pleaded guilty to the two count charge relating to possession of counterfeit currency notes.

After listening to the prosecution witness testimony, the prayer of prosecution counsel, Salihu M. Aliyu, and the accused plea for leniency, Justice Quadri convicted Thomas accordingly and sentenced him to 2 years imprisonment without an option of fine.