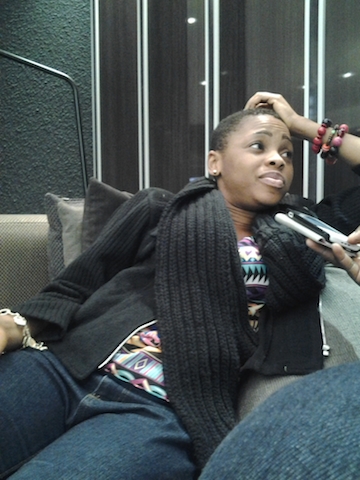 Hundreds of music stars and other entetainment luminaries have been streaming into Johannesburg and neighbouring Soweto, South Africa, as the year`s edition of Channel O Africa Music Video Awards holds in a couple of hours tonight 30 November.

The annual awards which marks its tenth series is taking place at the Walter Sisulu Square, in Kliptown, Soweto, and organisers, performing artistes and awards presenters have been having series of rehearsals since yesterday, 29 November in order to deliver a spectacular show from all platforms.

Already stars including Nigeria’s dynamic singing duo, Peter and Paul Okoye, better known as PSquare, Chidinma, Skales, Jesse Jagz, Flavour and DJ Caise, are getting ready to storm the CHOAMVA stage to delive a massive performance worthy of celebration of a decade of the continent’s leading music video channel. And the last rehearsals are underway as at the time of this report.

“I am looking forward to a great night and hopefully go home with an awards,” Chidinma told P.M.NEWS at The Maslow Hotel in Sandton City where most of the stars were quartered.

“This year’s awards will surely be bigger with the quality of entries and rolls of artistes schedule to perform. It will be fun,” added DJ Caise, Nigeria’s celebrated Disc Jockey and one of Channel O Awards judges.

“I am here to have fun and from what I have observed, Soweto will literaily be on fire,” singer and producer Jesse Jagz noted.

Other notable artistes already in town are Ghana’ Sarkodie, Fally Ipupa, Kcee among others.

Awards will be given in 14 categories included multiple nods for over 10 artistes from East, West, and Southern Africa.

Apart from being in the race for the Most Gifted Video of the year as well as Most Gifted African artiste (West) for the hit, ‘Alingo’, Nigeria’s PSquare will also be honoured with the highly coveted special recognition awards during the ceremony.

The honour will put the twins on a pedestal with a few African music greats who have received the same honours.

Others past awardees of the Special Recognition Awards include Ghana’s George Lee in 2008, South Africa’s Brenda Fassie in 2009, Somalian K’naan got the recognition in 2010. Nigerian Kokomaster, D’Banj was recognised for his impact on the continent music scene in 2011, while another music veteran from South Africa, Oscar ‘Oskido’ Mdlongwa had it last year.