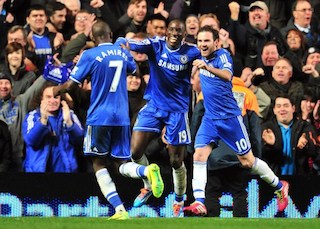 Both Chelsea and Manchester City capitalised on Liverpool’s shock defeat by Hull on Sunday to leapfrog the Merseysiders and close the gap on Premier League leaders Arsenal.

Chelsea recovered from conceding a goal inside the first minute at Stamford Bridge, when Jay Rodriguez pounced on a poor backpass from Michael Essien, to beat high-flyers Southampton 3-1.

The win took Chelsea, now in second place, to within four points of Arsenal.

“What can you do when they score after 13 seconds?” said Chelsea manager Jose Mourinho.

“We kept calm and the second-half performance was really good. We showed heart and a bit of quality.

“In this crazy league this result is important as once again title contenders have dropped points.”

“I’m very pleased because we won against a very difficult team, especially when they had possession,” said City manager Manuel Pellegrini, who again fielded Costel Pantilimon in preference to England goalkeeper Joe Hart.

Earlier, Hull beat Liverpool for the first time in their history with a 3-1 win at the KC Stadium.

Liverpool started the match in second place but this result dropped them to third, even before Chelsea had kicked-off and City’s win meant they finished the day in fourth place.

Hull though put the result beyond doubt with two goals inside the final 20 minutes, David Meyler netting before Liverpool’s Martin Skrtel turned Tom Huddlestone’s shot into his own net.

“It is always nice to turn over Liverpool, but it was the response after the loss to Crystal Palace that pleased me,” said Hull manager Steve Bruce.

“There is no doubt that we miss a player of Daniel Sturridge’s quality and we do not have a squad that is big enough to cope with his absence,” Rodgers said.

The victory united, at least temporarily, Hull owner Assem Allam and fans unhappy at his intention to change the club’s full name from Hull City AFC to Hull Tigers.

This has prompted chants of “City till we die” at home games from some Hull supporters.

Egyptian businessman Allam, in an interview with the Independent on Sunday, hit back by saying: “They can die as soon as they want, as long as they leave the club for the majority who just want to watch good football.”

But a rather more conciliatory Bruce said: “I think that this club would not be here without the owner.

“I am happy to speak to the owner and give him my opinion but, as I said earlier, if he wants us to play in pink fairy dresses then he is entitled to that view.”

Earlier, champions Manchester United needed two goals from Wayne Rooney to help them twice come from behind in a 2-2 draw away to Tottenham.

Spurs went ahead through a Kyle Walker free-kick and then made it 2-1 thanks to a stunning strike from Sandro.

But Rooney hit back on both occasions, although the draw left United nine points adrift of Arsenal.

“We’re concerned that we’re not as close as we’d like to be but it’s a long season,” said United manager David Moyes. “Hopefully we’ll be there or thereabouts.”