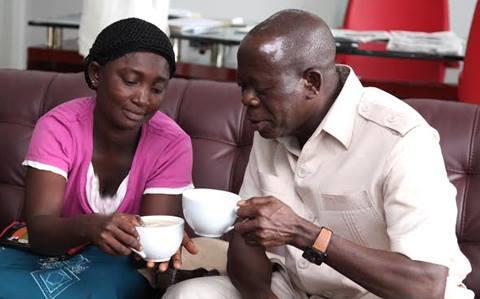 Governor Oshiomhole and Mrs. Ifijeh, the widow, taking tea together

Mrs Joy Ifijeh, the Nigerian widow who was rebuked by Governor Adams Oshiomhole for blocking the road with her goods, says she snubbed the offer of N250,000 by the Peoples Democratic Party (PDP) because she was satisfied with the apology and offer of a job and N2m by the Governor.

She also said she is not ready to be used as a pawn by the PDP on the chessboard of politics, advising the party to give the said money to another widow instead.

She disclosed this during the presentation of her letter of appointment into the Edo State War Against Indiscipline to her by Special Adviser to Governor Oshiomhole on Media and Public Affairs, Mr Kassim Afegbua at the Government House in Benin City, yesterday.

According to her “I want to thank Oshiomhole sincerely for this appointment and I wish to state that I have forgiven him from the bottom of my heart. And for the money promised me by PDP let them give it to other widows. I do not need the money”.

She described the governor’s gesture as humane and promised to support the government policies and programmes in the state.

Earlier, while presenting the appointment letter, the Special Adviser to the Governor on Media and Strategy, Mr Kassim Afegbua,said “the appointment is in fulfilment of Comrade Oshiomhole’s promise to offer the widow employment into the service of the Government.

He said the appointment is effective from 3rd December. 2013, stressing that she would be expected to resume and conform to the ethics of her position.