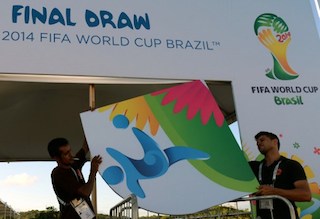 Workers put finishing touches to the entrance to the complex where the Brazil 2014 FIFA World Cup final draw will take place today December 6--, in Costa do Sauipe, state of Bahia, on December 2, 2013.

All is set for the draw at Costa do Sauipe, Bahia in Brazil for the much awaited draw for the 32 teams taking part in the competition.
Even the artistes that will entertain at the spectacular event are ready.

The comperes will be Brazilian actors Fernanda Lima and Rodrigo Hilbert

According to FIFA.com, three big names have been added to the line-up of Brazilian acts who will be performing at the 2014 FIFA World Cup Brazil™ Final Draw at Costa do Sauipe, Bahia, on 6 December 2013, with singers Alexandre Pires and Vanessa da Mata and the Companhia de Danca Deborah Colker all signing up for the event.

Alexandre Pires ranks among Brazil’s best-known singers, while Vanessa da Mata is one of the biggest revelations in Brazilian popular music of the last ten years. Both have won national and international awards, as has the Companhia de Danca Deborah Colker, a contemporary dance troupe known the world over.

The three acts will join Emicida, Alcione, Margareth Menezes and the percussion group Olodum. The evening’s entertainment, FIFA.com says, will represent the diversity and quality of Brazilian culture and music. “Inspired by the official Brazil 2014 slogan “All in One Rhythm”, the show will take as its themes the five traits that make Brazil what it is: a cohesive society, the power of innovation, lush green nature, vibrant football and a land of happiness.”

The Final Draw will be broadcast live from 17:00 CET (13:00 local time) and available to 193 countries, with nearly 1,300 guests expected to attend the event along with 2,000 reporters. The 32-team draw will decide who faces who in the group phase of the second FIFA World Cup to be held in Brazil, which will take place between 12 June and 13 July 2014.

African Champions upbeat for the draw

Nigeria may have flopped at their last two World Cups but expectations are high of a better showing in Brazil next year, irrespective of the first-round group they are drawn in on Friday.
The Super Eagles have not won a World Cup finals match since a 1-0 win over Bulgaria at the 1998 World Cup in France.
But defender Efe Ambrose said they should not dread clashing with any team in the first round in Brazil. Instead other sides should a meeting with the African champions.
“We are African champions and instead of trying to avoid any team in the group stage, it should be the other teams trying to avoid us,” the Celtic defender told AFP this week.
“All we need to do is to prepare very well for the competition by playing some top friendlies and making sure that we the players are fit and playing for our various clubs in Europe.
“We must be ready to play against the best teams in the world if we wish to make an impact at the World Cup.”

Portugal captain Cristiano Ronaldo believes Spain, Brazil and Germany are the favourites to win next year’s World Cup and is keen to avoid all three in Friday’s draw for the group stages.
The Real Madrid forward ensured his country will be represented in Brazil next summer with a stunning individual performance as he scored all four goals in Portugal’s 4-2 aggregate playoff win over Sweden last month.
However, having been eliminated by Spain in each of the last two major tournaments, he is keen to avoid some of his club teammates along with Brazil and three-time winners Germany in the early stages.
“The candidates to win the World Cup are Brazil, Spain and Germany. Ideally it is not a good moment to be drawn with them, but we are not thinking about that just now,” he told Spanish sports daily Marca.


FIFA have announced a rise in prize money for the participants at the 2014 FIFA World Cup.

The total prize money has been increased by 37 per cent compared with the last edition in South Africa in 2010.

At its meeting in Costa do Sauipe/Bahia earlier today, the FIFA Finance Committee approved an increase to the contribution pool for the 2014 FIFA World Cup Brazil to $576 million, compared to £420 million in 2010.
The winners will receive $35 million, while the runners-up will obtain $25 million, the third-placed team $22 million, the fourth-placed $20 million, and quarter-finalists $14 million each. Teams that reach the round of 16 will each get $9 million, while those eliminated in the group stage will each receive $8 million. A total of $358 million will be shared as prize money among the 32 participating teams.

In addition, each of the 32 qualified teams will be granted USD 1.5 million for preparation costs. $70 million will be provided by FIFA via the member associations to the clubs whose players take part in the final competition as a contribution towards their participation.

A further $100 million has been allocated to the Club Protection Programme for the FIFA World Cup. This programme was launched in 2012 and is applicable on a worldwide level for all matches listed in the international match calendar for the period from 1 September 2012 until 31 December 2014, including the 2014 FIFA World Cup.
Reply

Watch out for more update here.