In Video: Amazing rescue of a Nigerian sailor thought lost at sea 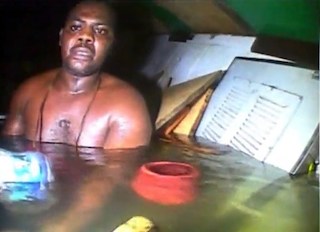 
Remarkable video footage has emerged of a 29-year-old Nigerian sailor who was rescued after spending nearly three days trapped in an air pocket after his ship capsized in rough seas.

Harrison Odjegba Okene had been left for dead after his tug boat the Jascon 4 went down off the Nigerian coast on May 26 but he managed to survive by squeezing into a compartment when the vessel settled upside-down 30 metres (100-feet) underwater.

Footage from a helmet-mounted camera on a frogman scouring the wreckage for survivors shows how he came across a hand in the gloomy waters.

“Ah, right. You’ve found one, yeah?” his colleague guiding operations says in English in a southern African accent, presuming the discovery of another dead body.

But the hand, finger tips badly wrinkled from the sea water reaches out and grabs the diver’s glove.

His response is inaudible but sounds shocked while his colleague watching the monitors exclaims: “He’s alive! He’s alive!

Footage then shows the diver, identified as “Nico”, slowly helping Harrison, who is wearing just a pair of black shorts and looks visibly shaken, into a high-visibility reflective safety harness.

He is seen blowing out his cheeks and sipping gingerly from a bottle of mineral water amidst the debris of the stricken ship, complaining that the water was cold.

The sailor is then painstakingly helped into a wetsuit and helmet with breathing apparatus.

“Can you hear me?” the controller asks him eventually via the radio in the helmet.

“OK, listen to me, we’re putting the hood on so you can breathe. You mustn’t panic, all right? We’re going to bring you home, OK?

“What we want you to do is keep calm, OK? Are you feeling OK? Are you sure? Have got any injuries?

“Harrison, Harrison,” he replies, going on to confirm that he was a cook on board the vessel when it capsized 62 hours earlier.

Harrison is then led through the wreckage of the upturned boat and into a diving bell to bring him to the surface.

Once in the diving bell, the controller exclaims: “Good job, my friend. Well done. You’re a survivor!”

The footage was made available to AFP by Netherlands-based DCN Diving, which carried out the rescue operation.

In an email, the company said it was releasing the video, which is nearly 11 minutes long, as a “tribute to us all working on this amazing rescue”.

Ten of Harrison’s crewmates died in the incident, which happened off southern Nigeria’s Escravos, the site of a Chevron oil terminal.

Chevron had said that heavy ocean swells caused the tug to capsize.

According to the operator, West African Ventures Limited, the tug was involved in towing a tanker at the time.