Atiku in Ekiti, silent on membership of APC 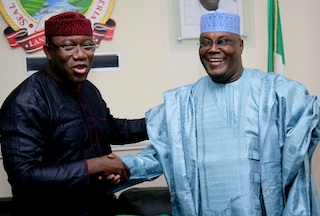 Jamiu Yisa
Former Vice President, Alhaji Atiku Abubakar, has described the merger of the new Peoples Democratic Party and the All Progressives Congress (APC) as a welcome development for the country’s democracy to thrive.

Speaking in Ado Ekiti on Friday, shortly after a courtesy call on the State Governor, Dr Kayode Fayemi, the former Vice President who declined comment on whether he now belongs to the APC or the PDP said he pitches his tent only with democracy.

Asked why Atiku visited him, Governor Fayemi explained that the former Vice President was in the State to attend a function and had deemed it fit to pay a courtesy call on him.

The Governor who described Atiku as an admirable leader stated that there was no question that the former Vice President has demonstrated that he is not a fake democrat as he had consistently stood with the people even against all odds.

Fayemi who asserted that anyone who believes in the a Nigerian project is his friend added that he is always ready to stand by the side of democrats so long it is to deepen the nation’s democracy.

“He has always been a leader I admire and have had very good relationship with him so I am not surprised that he stopped by. Anything that can deepen democracy in this country, you will find me standing on the side of democrats.