Efe Ambrose marks birth of new baby with a goal 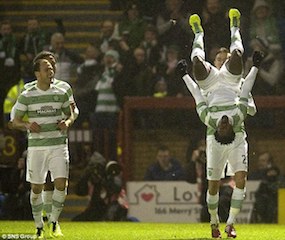 Nigerian international, Efe Ambrose celebrated the birth of his baby daughter with a goal for leading Scottish club side, Celtic Friday night.

Ambrose’s goal came in the 54th minute, a fine header, soaring above the Motherwell defence to knock the ball into the net.

For Ambrose, a defender for Celtic, it was a promise fulfilled for his new baby and he celebrated with a spectacular back flip, head over heels.

Ambrose joined up with his team-mates only late yesterday, yet showed no signs of physical or emotional fatigue.

“It was a special day for me”, Ambrose said in a post-match interview. Ambrose has now brought his goal tally for Celtic to five, since he joined the team in the summer of 2012.